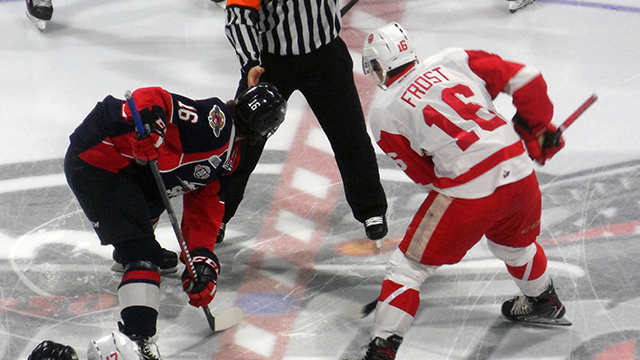 WINDSOR, ON-
Every time the Soo Greyhounds and Windsor Spitfires have met this season, it had been decided by a single goal.

If not for an empty netter by COLE MACKAY with twenty seven seconds to go in regulation on Thursday this outcome would have been the same.

The Greyhounds would open the scoring on their second shot of the game just shy of the five minute mark.
With a man in front of him, KEEGHAN HOWDESHELL paused before feeding a pass to his left to a wide open MORGAN FROST who beat Spitfires netminder Colton Incze blocker side for the 1-0 Greyhounds lead.
Frost, who marked his 35th goal of the season, entered the night just three points out of the OHL scoring lead.

ETHAN TAYLOR kept the lead intact about a minute later getting a quick pad on Tyler Angle who was trying to capitalize on a Windsor 2-on-1.

Windsor pull even just before the midway point on the lone powerplay of the period.
Just eight seconds into the man advantage, CURTIS DOUGLAS was quick on the rebound for his 23rd goal of the season and a 1-1 game.

The tied contest carried over until well into the second half of the period, where Incze made one of his seventeen saves of the period getting a sprawling arm and paddle on a bouncing puck from crossing the line.

With under four minutes to play in the period, the Spitfires would outwork the Hounds down low in a play that saw Jean-Luc Foudy circle the net before centring a pass to Will Cuylle.\
The Spitfire rookie beat Taylor, who had no chance on the play, for a 2-1 Windsor lead.

Under two minutes to go CULLEN MCLEAN tried to change the tide with hard work up the left wing and a diving effort that hit ZACK TROTT in the middle who attempted to deke towards Incze before the puck rolled away.

Greyhounds outshot Windsor by an 18 to 10 margin in the first, but trailed 2-1 after twenty minutes.

MATTHEW VILLALTA would replace Greyhounds starter ETHAN TAYLOR at the start of the period due to an undisclosed upper body injury to Taylor.

Midway through the period, a mid-ice altercation between RYAN O’ROURKE and the Spitfires Sean Allen at neutral ice that saw JADEN PECA step up and with all three issued minors, Windsor would come out of it with the powerplay.

The Greyhounds killed off the two minute span without allowing a shot and would get rewarded shortly thereafter.

A couple minutes after going back to even strength the Hounds went in on a two-on-one.
JOE CARROLL carried the puck up the right side before sending a cross ice feed to RORY KERINS who beat Incze for his 9th goal of the season, and third in the last two games.
The goal at 12:04 was assisted by CARROLL and MAC HOLLOWELL.

The Greyhounds first powerplay came late in the period but yielded no results and the teams skated through forty minutes tied 2-2.

Four seconds after killing off a Windsor powerplay in the third, the Greyhounds took the lead in the game for good.
KEEGHAN HOWDESHELL worked to keep the puck in neutral ice possession before his getting the puck to MORGAN FROST who notched his second goal of the game for a 3-2 Greyhounds lead.

Along with killing off another shorthanded situation later, the Greyhounds kept Windsor shotless for about half of the third period.

The insurance marker came when MORGAN FROST got deep in the Windsor end and battled for the puck to the side of an empty net and moved it out to MACKAY for the one-timer at 19:33.

With the win, the Greyhounds extended their winning streak to three games while improving their record to 38-12-6-1, good for 83 points.
With London falling in Peterborough tonight the Greyhounds are now within 2 points for 1st in the Western Conference, while they maintained the four point lead in the division over Saginaw, who won at Barrie.

UP NEXT;
The road trip continues TOMORROW NIGHT (Fri. Feb 22) for the Greyhounds when they skate into the Memorial Auditorium in Kitchener.

Game time against the Rangers is 7:30 PM.