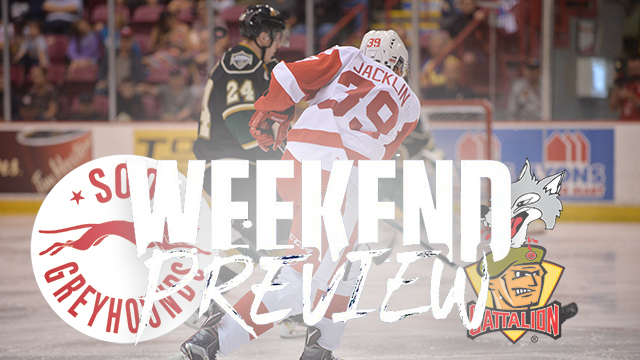 Amidst a six-game winning streak, Week 9 of Ontario Hockey League action takes the Greyhounds back on the road this coming week for a swing to two of their nearest competitors, both in Northern Ontario.

Heading into the games the Greyhounds find themselves in second in the West Division, and second overall in the OHL with a record of 15 wins, 3 losses, 2 overtime losses and 0 shootout losses, good for 32 points.
They are a single point behind the Sarnia while holding a game in hand over the Sting who dropped a 5-3 contest to Flint on Wednesday afternoon.

During their current winning streak the Hounds have outscored their opposition 31 to 11.
Speaking of offense, MORGAN FROST has three goals in the last two games, while JACK KOPACKA meanwhile has scored in three consecutive games.
Third-year defenceman MAC HOLLOWELL is coming off a five-point performance (2g, 3a) last weekend in Flint.

First-year forwards HAYDEN FOWLER and JOE CARROLL return to the club after missing the last five games while representing Team Canada at the 2017 World Under 17 Hockey Challenge.
Carroll was a member of Team Canada White where he had 2 goals and 2 assists in 6 games played (lost in bronze medal game), while Fowler (Team Canada Black) had 1 goal in 5 games played.

Let’s take a look at the two upcoming games:

The quick two game road trip opens on Thursday Night with the third meeting of four this season between the Greyhounds and Battalion.
It’s the final regular season meeting at the North Bay Memorial Gardens.

Thus far the Greyhounds hold a 2-games-to-0 advantage over their rival from the Gateway City although both games have been decided by two goals or less.

Here’s how the previous meetings have faired:
W 3-1, Nov. 5 @ SSM
Hounds led 1-0 after the first, 2-0 after second;  North Bay got on the board and broke Matthew Villalta’s shutout bid with 3:45 to go in regulation before Boris Katchouks EN goal;  Hounds outshot NB. 33-26;  Both teams scored on PP

OTW 2-1, Sep. 29 @ NB
Hounds were held to just 5 shots and trailed 1-0 after the first period;  Hayden Verbeek scored early into the second to tie the game before teams skated scoreless through third;  Katchouk scored 0:43 into OT for the win;  North Bay posted 40 shots to the Hounds 29

As for North Bay (6-12-2-0, 14 points – 5th in Central Division) they enter the game winless in their last 4 games, most of which was part of a lengthy six game road trip.

Friday Night is the final game of the week for the Hounds, and the first of back-to-back games against the Wolves.

The game represents Game 4 in the Bell Challenge Cup symbolic of the season series with the Wolves.
To-date, the Hounds have a pair of victories (both in overtime) against Sudbury and a single loss in their previous meetings.

OTW 2-1, Oct. 1 @ SBY
Scoreless first period before Keeghan Howdeshell opened the scoring, and tallied the only goal of the 2nd period at 7:46;  Sokolov tied the game just over 5 minutes into third before it went to OT;  2:23 into extra session Boris Katchouk ended the game;  Hounds outshot SBY 38-31;  Both teams 0-for-3 on PP

Like North Bay, Sudbury comes into action this week on a 4-game losing streak along with a 3-5-2-0 record in their last 10 games.

Fresh off an appearance in the CIBC Canada/Russia series, Dmitry Sokolov paces the Sudbury offense with 11 goals and 13 assists (24 points) in twenty-games so far this season.

Sudbury is the 2nd most penalized team in the OHL with 280 penalty minutes.