WEEKEND PREVIEW; Hounds cap off first half of the season on the road 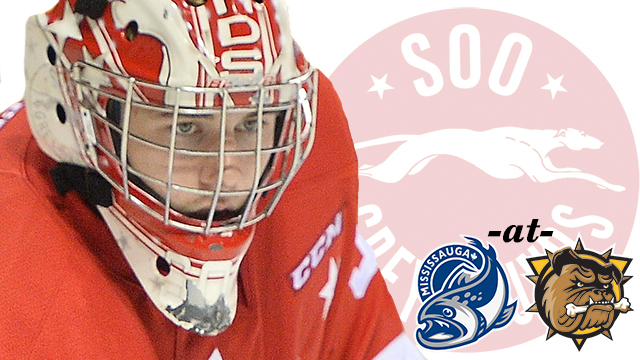 When Saturday Night hits, members of the Soo Greyhounds will be departing the club for an extended Christmas break with family and friends.
But for the youthful West Division leaders, there are two more Ontario Hockey League contests ahead of them before the must deserved R&R.

A trip to Southern Ontario will bring the team into Mississauga and Hamilton over the next two days, starting tonight against the Steelheads.

The Greyhounds enter the weekend with an overall record of 19 wins, 8 losses, 4 overtime losses and 1 shootout loss, good for 43 points and 1st in the West Division (2nd in the Western Conference).
Their lead for the top spot in the division sits at eight (8) points, with the Saginaw Spirit holding two games in hand.

With a 7-2-1-0 record in their last 10 games, the Hounds are coming off a 2-4 setback this past Sunday afternoon against the Barrie Colts.
That snapped a 4-game winning streak for the club.

MORGAN FROST (20-38-58 in 32 GP) leads the Greyhounds offense, although the Aurora, ON product will be one of four absences from the line-up this weekend.
FROST, BARRETT HAYTON and MATTHEW VILLALTA are currently vying for a spot on Team Canada’s entry at the 2019 IIHF World Junior Hockey Championship while ROMAN PUCEK is representing the Czech Republic at the 2018 World Junior A Hockey Challenge.

That will leave the Greyhounds roster sitting at eleven forwards (11) and seven (7) defenceman.
MARIO PECCIA has been recalled from the Toronto Lakeshore Patriots (OJHL) to join ETHAN TAYLOR as the club’s two netminders.

KEEGHAN HOWDESHELL (Brighton, MI) is not only the Hounds 2nd-leading scorer, but has been on a torrid scoring pace, notching goals in 7 of his last 8 games.
The overager has 11 goals and 5 assists during that span, including back-to-back hat tricks.

Netminder ETHAN TAYLOR is expected to get the call between the pipes, and will be making his 1st start in nine games when action kicks off tonight.

Here’s a preview of the two match-ups ahead:

They only meet on two occasions, and tonight mark’s the first in the Western versus Eastern Conference match-up between the Greyhounds and Steelheads.

While the Greyhounds are positioned tops in their division, Mississauga is mid-pack in the Central Division with a record of 15-13-2-0, good for 32 points.
They trail the division leaders (Sudbury, Niagara) by ten points while holding the slimmest one point advantage over Barrie.

Specialty teams could come down as one of the defining factors in this one as Mississauga ranks 5th among the 20 OHL clubs on the powerplay (Hounds are 7th), while the Greyhounds sport the #3 ranked penalty-kill.

The Steelheads, who have dropped 7 of their last 8 contests while being outscored 41 to 19, are starting off a weekend that will see them play 3 games in 3 days.

For the second and final time this season, last year’s OHL Championship opponents will square off.

It’s been just under a month (Nov. 20/18) since the Greyhounds posted a 4-3 victory over the Bulldogs when they made their only visit to GFL Memorial Gardens.
Keeghan Howdeshell notched the hat-trick on that night, as the Greyhounds built up a 4-1 lead before holding onto the victory and outshooting Hamilton 39-27.

Heading into Saturday Night at the FirstOntario Centre, the Bulldogs will be minus 4th year forward MacKenzie Entwistle (3rd Round, 2017 AZ) who among those at Team Canada’s World Junior Selection Camp.

Of note, the Bulldogs have scored a league-leading 37 goals on the powerplay – leading the league with 28.2%.