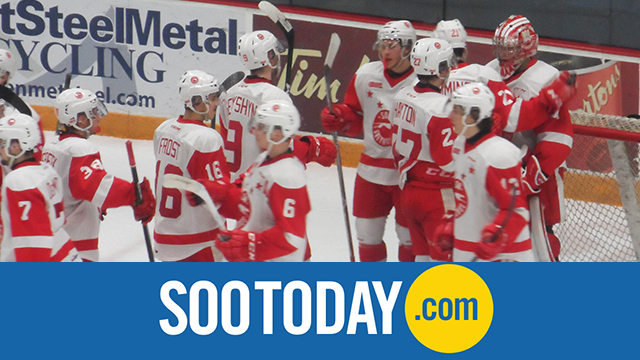 It wasn’t the perfect start but the Soo Greyhounds rebounded to pick up an important two points in the Ontario Hockey League standings on Friday night.

The Greyhounds scored five times in the final 40 minutes to beat the Guelph Storm 6-0 at the Sleeman Centre in Guelph Friday.

“They outplayed us in the first,” said Greyhounds Coach Drew Bannister.

“In the second and third we were really good,” Bannister also said.

“I thought we played very structured, I thought we carried the pace, we outshot them and we out-chanced them,” Skalde said

“But one turnover at the offensive blue line and it’s 1-0 and you can just feel the momentum change on our bench and try to get back to where we were and it was difficult.”

Greyhounds forward Morgan Frost, who had a goal and an assist, called the game “one of our more complete games of the season.”

Greyhounds netminder Matthew Villalta made 37 saves for the shutout.

The rookie netminder, who picked up win number 21 on the season said the shutout “feels really good.”

“Matty kept us in there in the first,” Bannister said. “He was excellent the whole game when he needed to be, especially in the first period and in the third period when they were on the power play.”