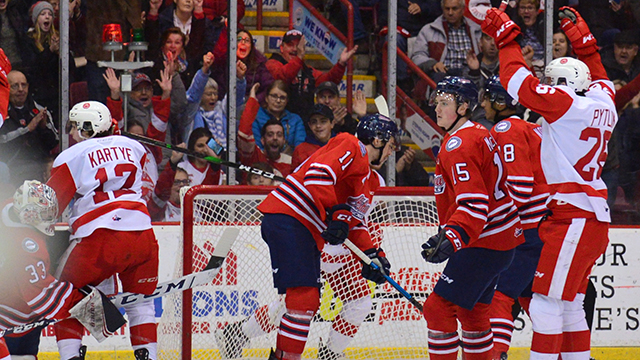 TYE KARTYE continued his stellar week personally, and in doing so, helped the Hounds complete the sweep in this week’s OHL action.
The Kingston, ON product opened the scoring on Saturday Night, and recorded another two points, to finish the week with a total of eight points for the Hounds.

After skating through nearly the second period scoreless, the Greyhounds would grab a crucial goal in the final minute to increase their lead to a pair.
ZACK TROTT outworked a number of Generals in his own zone, setting up a play that developed through ROBERT CALISTI and KARTYE, before JAROMIR PYTLIK’s redirect along the ice to give the Hounds a 2-0 lead through forty minutes.

Oshawa would cut the lead in half early in the second period, but a timely goal just 0:38 later regained the team their cushion.
After his first shot was blocked, BILLY CONSTANTINOU opened himself up and put a shot gloveside on Zachary Paputsakis for the 3-1 lead.

Along with holding Oshawa to just five shots in the third period, and a mere 23 overall, the Greyhounds skated to the 3-1 Saturday Night victory.

The win improves the club to 9-12-1-0, good for 19 points on the season and caps off a week with wins over Sudbury, Hamilton and Oshawa respectively.

UP NEXT;
The Greyhounds head out on a three-game West Division roadswing this coming week.

Action kicks off on Thursday, November 21 at the WFCU Centre in Windsor against the Spitfires (7:05 PM).
Friday, November 22 it’s the Hounds and Firebirds (7 PM) before action rounds out on Sunday (Nov. 24) in Sarnia against the Sting (4:05 PM).