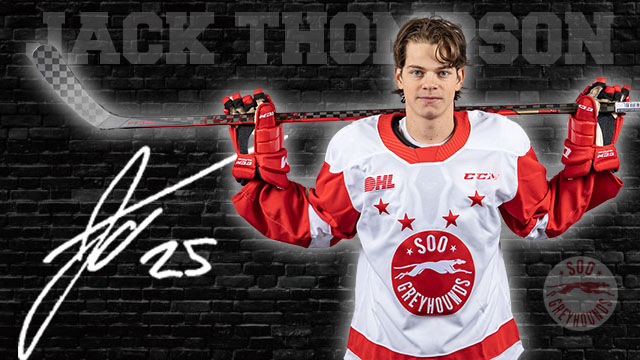 To say it was a disheartening weekend at home for the Soo Greyhounds is an understatement.

The disappointment following a 5-2 loss to the Windsor Spitfires on Saturday night only swelled in the aftermath of a 10-4 setback on Sunday afternoon.

But by Monday morning, the Greyhounds were buoyed by the acquisition of 19-year-old (2002 birth year) Jack Thompson, a star defenceman, in one of three trades made by general manager Kyle Raftis.

And, just like that, a team in need of a mental and emotional lift, got one.

“Definitely, that helps us mentally,” said Hounds captain Ryan O’Rourke, whose club is slated to play host to the Owen Sound Attack on Saturday (7:07 p.m.) and Sunday (2:07 p.m.) at GFL Memorial Gardens. “It brightens our spirits a little bit and kind of gives us something to look forward to. Just having some new people here is good.”

In order to grab Thompson, a six-foot-one, 185-pounder with a reputation as one of the Ontario Hockey League’s elite rearguards, the Soo surrendered 18-year-old (2003) defenceman Jacob Holmes, 18-year-old (2003) winger Marc Boudreau and a second-round choice in this spring’s OHL draft.

To help fill the void left by Boudreau’s departure, the Hounds acquired 19-year-old (2002) winger Keegan McMullen from Peterborough in exchange for a sixth-round pick in 2024. The Soo capped the day with Trade No. 3 before the 12 noon deadline, grabbing 18-year-old (2003) winger Ty Anselmini from Mississauga for a 10th-round choice in the 2022 draft.

“Three new additions to the team brings a little lift,” said head coach John Dean, whose club is set to enter weekend play with an 18-12-2-0 mark.

While agreeing Thompson, in particular, gives the team a needed boost mentally and emotionally, Dean called the former Sudbury Wolves standout a “special player. He’s a guy who can log a lot of minutes and he’s very good with and without the puck. Anytime you make an addition like that, you make your team better.”

But the coach also spoke of how he doesn’t want to put excess pressure on Thompson, noting how this was a strong team before the deadline deals.

And Dean also discussed how the decision by Raftis to do a little wheeling-and-dealing is a positive for the Hounds players and coaches “because we earned those decisions, quite honestly,” based on the fact they’ve established themselves as contenders.

“Guys on our team are excited, guys want to prove to each other they belong and that Sunday’s game was, hopefully, a blip on the radar of what’s been a very-successful season,” Dean added.

In his fourth OHL season, Thompson, as team captain, had eight goals and 15 assists in 29 games with the Wolves. The Courtice, Ont., native was taken by the Tampa Bay Lightning in the third round (No. 93 overall) of the 2020 NHL Entry Draft.

His plan, beginning Saturday, is to contribute in a number of ways.

“I’m just going to try my best to help this team go on a long (playoff) run,” Thompson said. “There’s a lot of speed and skill on this team. I think we’re really deep with a lot of skill up front, and we have a good D corps.”

After competing against the Hounds for four seasons, and practicing with his new teammates this week, Thompson spoke of how “you notice they have a good system and I’m just glad to be a part of it.”

Does he see the potential to compete for a championship?

“For sure, this team is capable of that,” he answered. “It’s one of the reasons why I wanted to come here, go on a long run and see where it takes us.”

Looking ahead to this weekend’s action, O’Rourke discussed the need to “get back to what we normally do and kind of forget about” the Windsor games – “as long as we also learn from them.”

Dean talked about wanting his players “to be extraordinarily hard with the puck and away from it. The things we do well, we want to do exceptionally well.”

The coach went on to explain how, during a meeting of the coaching staff, it was determined the Hounds “haven’t owned the puck enough. We haven’t been relentless on the puck enough, we haven’t had the mentality to be dogged on the puck. That’s something we’ll focus on during the next two games.”

The Hounds boss expects this weekend’s opponent to “work exceptionally hard and do their best to take away time and space. They’re going to be very physical and we have to find a way to match it.” 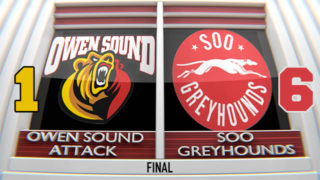 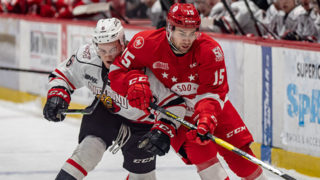 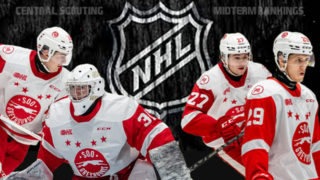