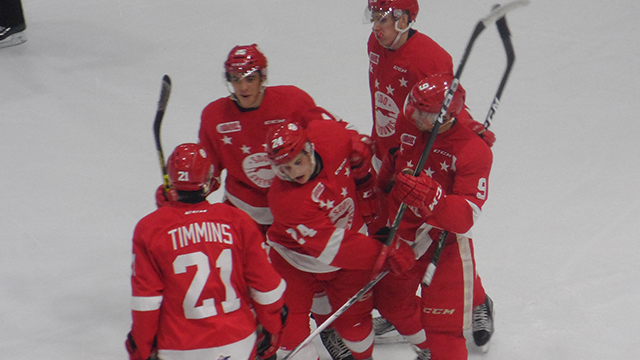 MISSISSAUGA, ON-
On a night when a nationally televised audience was watching, the Soo Greyhounds pulled the rabbit out of the hat in the third period for a come-from-behind victory over the Mississauga Steelheads.

And whether it was the travel, or jitters, the first forty minutes on Friday were stark contract just twenty four hours prior.

Missisauga would set the pace early, and along with throwing the body they would test JOSEPH RAAYMAKERS solidly just 2:10 into the game when  Shaw Boomhower was stopped point blank in the slot.

A minute later Aidan McFarland would swipe the bouncing puck from redirecting and crossing the Missisauga goal line keeping the Hounds off the board.

The Steelheads held a 7 to 1 shot advantage just four minutes into the period but the Greyhounds would push back and counter with a 11 to 6 advantage the rest of the way in scoreless opening period.

An early powerplay to start the period (1:53) wouldn’t provide the moment for the Hounds to open the scoring and it would be the home side shortly thereafter erasing the zero-zero score by notching a pair of goals 1:07 apart.
Brendan Harrogate took advantage of a Greyhounds line change at the 3:15 mark and skated through the defence to put home the first goal of the game going blocker side on RAAYMAKERS.
Then at 4:12 a turnover ended up on the stick of Owen Tippett and he placed a bullet high upstairs to stake Mississauga to a two goal lead.

The Steelheads had scored on two of their first four shots of the period.

ZACH SENYSHYN put the Hounds on the board before the period was ten minutes old at the 7:07 mark.
Taking the right wing around Mississauga defender Austin Osmanski, the Ottawa ON product tucked the puck low behind Matthew Mancina to cut the deficit in half.

But it became a 3-1 Steelheads lead with just over five minutes to go in the second period when JOSEPH RAAYMAKERS got a piece of  Brendan Harrogate’s shot but it bounced, or handcuffed, the Hounds netminder at 14:43.

Mississauga held the slim shot advantage of 24-22 through two periods of play.

Presented with a powerplay to start the third period (1:21), the Greyhounds would capitalize on the situation.
Just fifty-five seconds into the period, the Greyhounds pressed on the man advantage when MORGAN FROST was to the right of the goalie and put home his 10th goal of the season to make it a one-goal game (2-3).

And while the Hounds put up ten shots on the shot clock to Mississauga’s four in the opening half of the period they were still looking to pull back on even terms.

The game tying goal came just over the midway point when JACK KOPACKA’s shot went off a Mississauga stick and right to LIAM HAWEL who made no mistake and buried into the empty cage for his 3rd of the year, and a 3-3 game.

Then for the second time of the period, the powerplay would click for the Hounds.
ZACH SENYSHYN’s feed from the right of Mancina found BOBBY MACINTYRE who fired home his 13th of the year to provide the Hounds their first lead of the night with the eventual game-winning goal.

With the Hounds leading 4-3, Matthew Mancina turned aside a strong opportunity on DAVID MILLER while JOSEPH RAAYMAKERS matched that with a save of his own on Brendan Harrogate.

Mississauga would pull their netminder to the bench with 1:30 to play in regulation time, and that is when the Hounds would get two men deep alone in the Steelheads zone where TIM GETTINGER set-up BORIS KATCHOUK for the tap in into the empty net, to round out the third period comeback and provide the Hounds with a 5-3 victory.

The Hounds outshot Mississauga 17 to 8 in the third period, while scoring four unanswered goals en route to the victory.

Their sixth consecutive victory improved the team’s road record to 12-2-0-0 while improving them overall to 17-7-1-0 on the season and kept them on pace with Windsor for top spot in the West Division as the Spitfires won on the night as well.

* No lead is safe against Greyhounds (Sootoday.com)

UP NEXT;
The weekend concludes for the Hounds on Sunday afternoon when they face-off against the Oshawa Generals for the 2nd and final time this season.

Game time at the General Motors Centre is set for 2 PM.