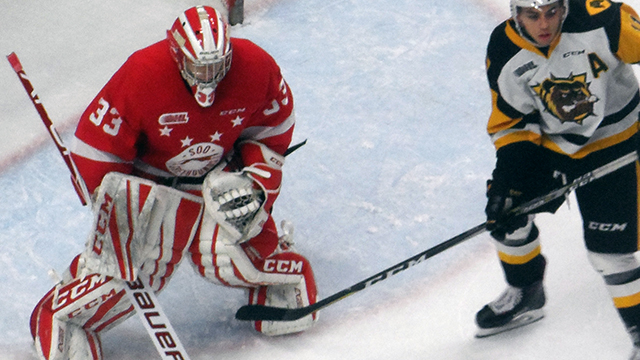 ETHAN TAYLOR was rock solid from start to finish on Saturday afternoon, and his Greyhounds teammates would reward the Trenton, ON native .
Along stopping all twelve shots he faced in the first period, the first-year Hounds netminder stopped 34 in total, en-route to the first star honours and victory on Saturday.

Just before the midway point of the period ALEX JOHNSTON would open the scoring fire a high shot from the slot overtop Nick Donofrio for a 1-0 Hounds lead.
MAC HOLLOWELL was the set-up man from deep in the Bulldogs zone, and Johnston’s finish would result in his 6th goal of the season, and 4th in the last 7 games.

Hamilton would go on the only powerplay of the first period, but it would be the Greyhounds specialty team play cashing in.
While shorthanded, KEEGHAN HOWDESHELL skated up the right wing and flipped the puck cross ice to a wide open RYAN O’ROURKE who one-timed home his 4th goal of the season, and a 2-0 Greyhounds lead.

That goal was the Greyhounds 12th shorthanded goal of the season.

Despite being outshot 12 to 8, the Greyhounds took a two goal advantage into the dressing room.

The Bulldogs would go to a man-advantage less than a minute into the second period and the two minute span led to chances for both clubs.
After ETHAN TAYLOR got a piece of a Bulldog shot and directed it off the crossbar, Hamilton got caught flat footed and watching thinking they scored, allowing MAC HOLLOWELL a chance the other way that would be denied.

For the Hounds their first powerplay quickly became a 5-on-3 for 1:38 but couldn’t extend their lead any further.

Then just around the midway point of the period, a Greyhounds turnover would led to a pass to Bulldogs leading-scorer Brandon Saigeon who had a break but was stopped by TAYLOR with a blocker save.

Saigeon would get to redeem that opportunity on a powerplay later, and just eighteen seconds into the when he fired overtop Taylor from the right circle and the Teddy Bears would fly to the ice.

Hounds lead was cut in half with seven minutes left in the period.

That goal stood through the period but with the Hounds holding an offensive zone faceoff with a mere eights seconds on the clock, would create a last second chance.
The left point shot provided a rebound that hopped on MAC HOLLOWELL who drove to the net and the single goal Greyhounds lead held through 40 minutes.

JACOB LEGUERRIER increased the lead to a pair of goals at 7:26 and then twenty-seconds later KEEGHAN HOWDESHELL scored his first of two goals in the game to increase the lead to 4 to 1.

The Hounds would then face back-to-back-to-back minor penalties that they would kill off successfully.

Twenty-one seconds after leaving the penalty box, HOWDESHELL would get a reach on the Bulldog defender on the wing and fire high upstairs to cap off the afternoon’s scoring

The Hounds will head into the Christmas break following a perfect weekend, and 7-2-1-0 in their last 10 games.

Their overall record at the midway point of the season sits at 21 wins, 8 losses, 4 overtime losses and 1 shootout loss.

UP NEXT;
The Greyhounds will now enjoy an eleven-day break before returning back to Sault Ste. Marie.

Next action for the team will be a pair of home games on Friday, December 28th versus Saginaw and then Saturday, December 29th versus Sudbury.
Both games are set for 7:07 PM starts at the GFL Memorial Gardens.

To purchase tickets for either of these two games, or any regular season home game, visit the GFL Memorial Gardens Box Office during regular business hours of 10 AM to 5 PM Monday to Friday, 10 AM to 2 PM Saturday, order online at www.gflgardens.ca or by calling 1.866.775.9422.