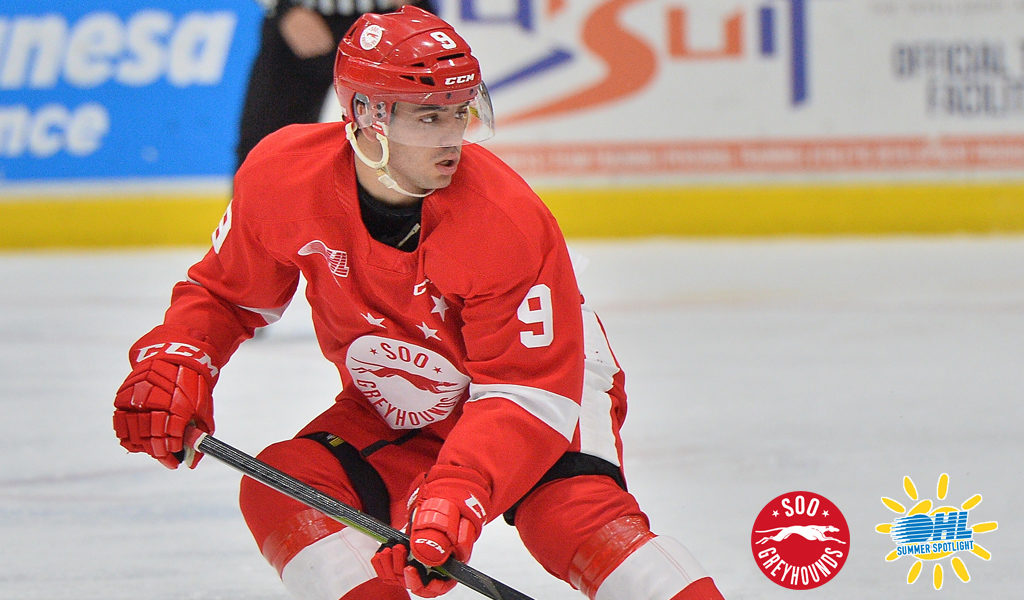 He showed up in great shape, which was no surprise, and his skating ability, good shot and strong hockey sense were on full display. But it was his maturity and confidence that really shone through.

If you ask Soo Greyhounds general manager Kyle Raftis, the now 19-year-old defender was the most impressive player during camp.

It translated to the rest of the season.

The Toronto-native finished out the 2019-20 campaign with 18 goals (nine of which came on the power play) and 50 points over 64 games, a steep climb from his seven point (2-5—7) output the season prior.

Though his numbers speak for himself, for Calisti, the big difference didn’t necessary lie in his on-ice production; he credits his improvement to a shift in confidence, above all.

“It wasn’t the on-ice stuff as much as people would think, just because my numbers and ice time improved. I think it was a lot of off-ice too,” he said. “I was given the chance to play and that helped mentally, and I gained a lot of confidence and played with a lot of swagger out there with the mindset of going out there every shift, making plays and not being worried about what comes after if I screw up. I think it was more the off-ice aspect where confidence is everything and I think that improved a lot, and then it showed on the ice.”

There were a couple factors that played into his newfound confidence. Being scratched for the entirety of the Greyhounds’ 2019 playoff run definitely lit a fire under him, as did getting passed over in his NHL Draft year following what was “one of the worst years of his life.”

“I wasn’t playing a lot and it was my draft year so you have very high hopes and when it goes the complete opposite, you’re disappointed,” he said. “You look back on things that you wish you could’ve done differently but it definitely helped me grow as a player on and off the ice and I think I took it in stride.”

Getting the chance to be a regular on the team the following year was a motivating factor and an opportunity to make an impression that he didn’t want to pass up on. With that chance to play higher minutes ultimately came recognition as the team’s most improved player and, as Raftis put it, one of the best skating defencemen in the league.

“He’s got a great shot and when you have that ability to be a threat from the blue line, whether it’s 5-on-5 or on the power play, it changes how the team defends against you,” said Raftis. “I think when Rob is on the ice, obviously as the year progressed, you could see how teams started defending our power play a lot differently. It gave us a lot more options and definitely made us a lot more dangerous down the stretch.”

That newfound confidence was obvious right from the start of last season, Raftis noticed.

“I think it even goes right back to training camp. From the first day, his mentality. It’s just that extra bit of confidence that he portrayed on the ice that was really impressive.” he remembered.

“We’ve always believed in his skillset, but just because of how his rookie year went, I think a lot of players would have blamed the situation or felt sorry for themselves, but he just took it as motivation. The way he walked around the rink, tried to talk to everybody, just right from that first day of training camp, he just looked like he was going to not wait for anybody to give him more ice time or wait for a different opportunity, he was going to create it himself. It was a no brainer to give him those opportunities whether it was 4-on-4, playing against other team’s top line, power play, penalty kill, all of those things.”

They’re opportunities he’s hoping will carry over to next season on a mostly veteran Greyhounds squad hungry for a higher slot in the standings after last year’s 29-31-3-1 finish that landed them one point out of a playoff spot when the COVID-19 pandemic interrupted the season.

But that ninth place finish wasn’t indicative of the team’s many impressive individual accomplishments like his own, says Calisti. With sights set on being a contender in 2020-21, he’s ready to be a leader as well.

Calisti with the big overtime rocket ? @OHLHoundPower snap out of their four-game funk with the OT road win ? pic.twitter.com/SP4TyreD4o

“I think I break a really unique aspect to the team for our younger guys, especially guys who are possibly going to be the same shoes as I was in my draft year. We have a lot of older guys coming in and not as many young guys so the guys may not play as much as they hoped but then possibly succeed the next year, similar to my situation,” he said. “I never played in my draft year so I think I bring that aspect of just experience.”

Heading into that third OHL season, he’s been working on cleaning up his defensive game to compliment the offensive spark he’s been able to provide. He isn’t a big fan of setting expections in terms of points, because if last year was any indication, he knows the points will come on their own with an improved game and mindset.

And while he hopes his 50-point season will translate into someone calling his name at the NHL Draft in October, he’s decided to focus on what he can control right now.

“I take it day by day. Obviously it’s in the back of your mind but you try not to think about it so much, as you don’t want to make yourself nervous or change what makes you successful.”