Sudbury continues to have Hounds number 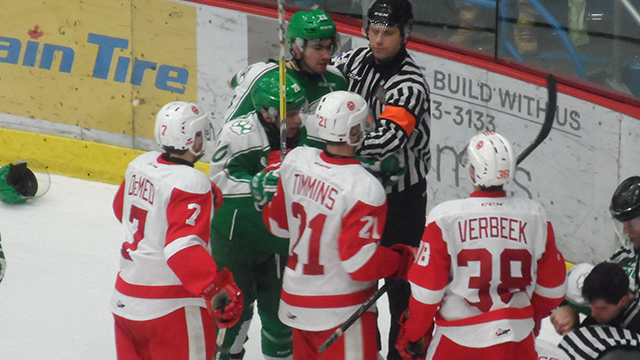 SUDBURY, ON-
To say the Sudbury Wolves have the Hounds number this season would be a understatement.
The 4th meeting of the Bell Challenge Cup would go to the Wolves, while thus far this year they have gained at least each and every time the two teams have met.

Sudbury would open the scoring quickly on Saturday Night, just 1:03 in when Drake Pilon took advantage of a whole bunch open ice and skated right in to the goal uncontested before putting the puck upstairs JOSEPH RAAYMAKERS for the 1-0 early lead.

From there and for the first half of the period the Hounds shut down Sudbury’s offensive chances and were outshooting the Wolves by a 7-1 margin.

In the second half of the period the Greyhounds would be tagged with penalties leading to three consecutive powerplay chances for the Wolves.
On the latter shorthanded opportunity BORIS KATCHOUK moved the puck across to BOBBY MACINTYRE who got two whacks at the puck only to be denied by Jake McGrath.

Seconds later, and just as the Hounds penalty expired, a point shot by Sudbury was redirected in front by Macauley Carson for a 2-0 Sudbury lead after the first period.

An early second period goal would put the Hounds in a deeper hole.
Less than two minutes in (1:49), Liam Dunda left wing shot beat RAAYMAKERS while catching some iron in the process and the Hounds trailed 3-0.

Like their Sudbury counterparts in the first, the Hounds would be provided powerplay opportunities  just over five minutes into the second period when they had a 5-on-3 for 1:13 but were unable to capitalize nor test Jake McGrath.

The Hounds would put together just two shots in the opening ten minutes of the second period before putting themselves on the board.

While skating 4-on-4, NOAH CARROLL moved the puck to BLAKE SPEERS who skated off the wall and right between the circles before firing a shot over the glove hand of the Sudbury netminder.
For Speers it was his 7th goal of the year and continued his points streak to eleven straight games.

Sudbury’s lead was cut to a single goal at 19:24 when SPEERS came onto the ice and worked the puck towards the goal before setting up JACK KOPACKA for his 18th of the year and the deficit was now 3-2 heading into the third period.

The Hounds would come out with a quick start while outshooting Sudbury 7-2 in the opening nine minutes.  Those shots, and a powerplay opportunity, were unable to yield the game tying goal.

MAC HOLLOWELL came close with just over eight minutes to play when he jumped on the rebound off a ZACH SENSHYN shot, but found iron.

A turnover minutes later would regain Sudbury a two-goal cushion as Macauley Carson moved the puck to Dmitry Sokolov at the left of the goal for his 10th point against the Hounds, and a 4-2 Sudbury lead.

With the goalie pulled for the extra attacker, a one-on-one foot race saw the Hounds rearguard get crossed up and fall leaving Liam Dunda the empty net to seal Sudbury the 5-2 victory.

Losses immediately following wins continued for the 10th straight game, as the Hounds record moved to 34-13-2-1, remaining at 71 points.

UP NEXT;
It will be a quick turnaround for the Hounds when they return to action TOMORROW afternoon (Sunday, February 5) in North Bay.
Game time against the Battalion is set for 2 PM.

To purchase your February Family Pack visit the Essar Centre Box Office during regular business hours of 10 AM to 5:30 PM Monday to Friday, 10 AM to 2 PM on game days, or 10 AM through game time on game days.