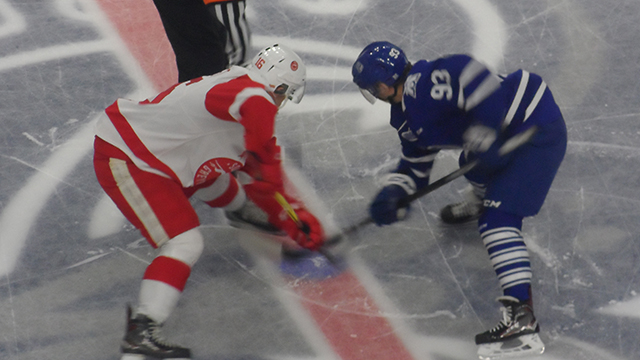 MISSISSAUGA, ON-
Twenty-three straight games and over two months.  That’s what separated the league-leading  Greyhounds between their last two losses this 2017-18 season.

For the first time since October 27th, the Greyhounds dropped a contest in OHL action, 4-3 in a shootout to the Mississauga Steelheads on Thursday Night.

“It’s significant to the guys.  It’s a pretty proud group and I think they were pretty upset.  So now we will have to regroup and bounce back tomorrow, and that’s the most important thing for our group and get back onto winning hockey games again” said Head Coach Drew Bannister post-game about the teams impressive run.

The opening minute of the game posed chances at both ends of the ice with the latter chance opening the scoring.
Just sixteen seconds into the game the Greyhounds RYAN ROTH was alone in the slot and was foiled by Jacob Ingham.  As the play went the other way, Owen Tippett found himself alone at the side of the goal and buried the opening goal past TYLER JOHNSON for a 1-0 Mississauga lead.

The Florida Panthers product (Tippett) would continue to pace the only offence of the period scoring the natural hat trick.

On Mississauga’s first powerplay of the game (4:43) Tippet stepped into a shot increasing the lead to 2-0 before completing the trio of tallies with under a minute to play in the period.
Ryan McLeod’s feed came from the side of the net to between the circles where another blast converted on the man advantage and the Steelheads led 3-0 after twenty minutes.

“Ya I think so.  Obviously, it wasn’t the start we wanted.  At the end of the day, the discipline, the penalties we took were unnecessary and they scored on both of them and that was probably the difference in the game because I thought we played well in the second, and very very well in the third.  We controlled the play the last two periods” commented Bannister when questioned about the impact of Tippet’s three first period goals.

“When you put yourself in that position, down by three goals it’s difficult to get yourself back in the game.  We were able to fight ourself back and had a chance to win it but we put ourselves down early and had to do a lot of work to get back in that game” he added.

MATTHEW VILLALTA would replace JOHNSON to start the second period in a move Bannister deemed as “it was more to try and get some more life into our team.”

And that it did.

Eight minutes into the second period HAYDEN FOWLER set-up KEEGHAN HOWDESHELL who appeared to bobble his first shot before putting the puck through the legs of Ingham to put the Hounds on the board.
Howdeshell’s tally was his 12th of the season and was the only goal in a period that saw the Hounds outshoot Mississauga 11 to 5.

Early in the third period (3:10), NOAH CARROLL’s left point shot found the back of the net for his 3rd goal of the year and put the visitors within striking distance, now down 3-2.

The Hounds would get on even terms with just over five minutes to go in regulation when team and league-scoring leader MORGAN FROST notched his 22nd of the year, with the assists to RASMUS SANDIN and BARRETT HAYTON.

Another final minute heroic was foiled against the Hounds when with just 19.6 seconds on the clock when the Hounds won the draw back to NOAH CARROLL who’s shot tricked through Ingham but the Mississauga netminder would fall back on the puck and force this game to overtime.

In the extra session HAYDEN VERBEEK won the battle to the Steelhead’s goalies right before sending the puck out front to TIM GETTINGER who was all alone, but the Mississauga netminder would shine with the glove save with just 2:09 to go in overtime.

Thus for the second consecutive game, the Greyhounds would go to a shootout.

Mississauga would receive goals from Mathieu Foget on shot one, and Owen Tippett on shot three while JACK KOPACKA and MORGAN FROST failed to capitalize in the 4-3 shootout final for Mississauga.

“That will be the challenge for the guys.  To make sure we respond in the right way and get ourselves focused to win a hockey game tomorrow in a different fashion” said Bannister regarding tomorrow’s game in Oshawa.

“Now we don’t have to worry about protecting a streak, it’s more about winning hockey games and that’ll be the start of it” he concluded.

UP NEXT;
The Greyhounds make their only visit to the Tribute Communities Centre in Oshawa TOMORROW NIGHT (Friday, January 5).
Game time against the Oshawa Generals is 7:35 PM.

Greyhounds lead the way in 2020 NHL Draft
3 weeks ago