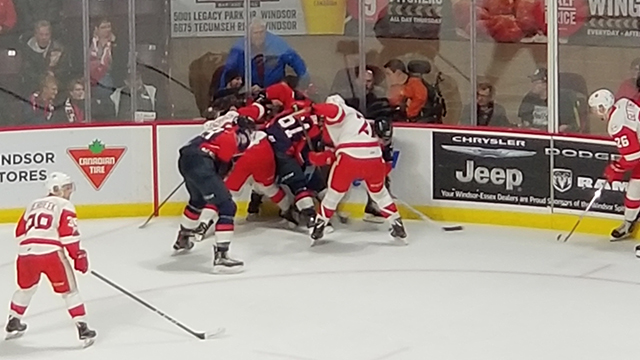 WINDSOR, ON-
Through the first five games of their season series, the Soo Greyhounds were perfect against Windsor while outscoring their division opponent 25 to 14.

That trend would would come to a halt in the team’s 32nd road game of the season on Thursday Night.

Starting off their final roadtrip of the regular season, the visiting Hounds had a strong start from the opening face-off creating instant time in the offensive zone.
That ozone time though wouldn’t equate to scoring and shots would be few and far between for either side though with the Hounds holding a slim 3-1 advantage with about eleven minutes to go in the period.

RASMUS SANDIN layed a solid hit on Windsor’s Chris Playfair around the midpoint of the period, but that wouldn’t provide any spark.

Scoring opened when Windsor scored exactly a minute into their second powerplay of the game.  After a Jake Smith shot, the rebound hopped past a Greyhounds stick and over to Igor Larionov who saw and empty cage and fired past a diving TYLER JOHNSON for the 1-0 Spitfire lead through twenty minutes.

The Greyhounds would pull onto even terms with just over five minutes gone in the second period.\
At 5:43 BORIS KATCHOUK and MORGAN FROST began the play in close on Michael DiPietro before it was tapped home by RYAN ROTH standing to the left side of the goal for a 1-1 game.
That was Roth’s 15th goal of the season and his 3rd in the last four games.

And while the offense started early in the period that would be the lone goal as both teams generated a mere five shots on goal and sat tied 1-1 after two periods.

Windsor gained the lead for the second time on the night under seven minutes into the third.
The Spitfires worked deep in the Greyhounds zone before finding Curtis Douglas out front for his 7th goal of the season and a 2-1 lead.

The single goal advantage stood through to late in the period where with 1:23 to go in regulation the Greyhounds called a timeout and subsequently called TYLER JOHNSON to the bench for the extra attacker.

Twelve seconds later Windsor took an odd man rush in the zone as Daniel D’Amico sealed the empty net goal and a 3-1 cushion.

The final minute then saw the Greyhounds gain possession, pull JOHNSON to the bench for the extra attacker for a second time but this time they would capitalize.
TIM GETTINGER at the side of the goal netted his 33rd of the year, and put the Hounds within a goal.

Time would expire in the contest though and for the first time in nine contests, the Greyhounds dropped a regulation contest falling to 52-7-2-2 on the season.

GAME NOTES:
• D Conor Timmins returned to the line-up for the first-time since January 10, 2018.  The Thorold,ON product has missed a total of 32 games this season (suspension, WJHC, injury) while the latest stretch lasted a total of 21 games.  He was paired alongside 9 Rasmus Sandin.
• G Tyler Johnson made his 16th start between the pipes for the Hounds and his 5th in the last 14 games while being named the games second star
• Scratches for the Hounds were 3 Wale, 18 Trott, 20 Caron and 24 MacKay.  All four are healthy.

Game time is 7:30 PM from the Memorial Auditorium.