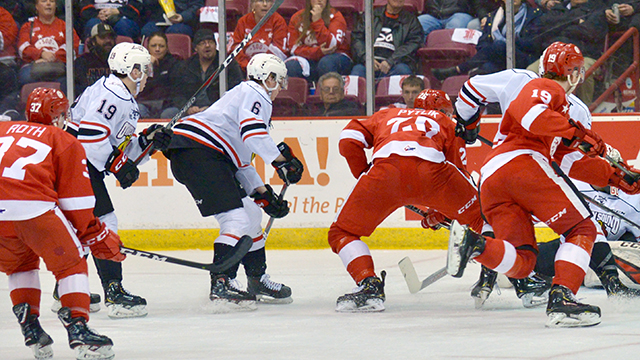 A slow start means the Soo Greyhounds are behind early in the Ontario Hockey League playoffs.

A pair of power play goals in the opening period gave the Owen Sound Attack a 2-1 lead through 20 minutes and the team eventually squeezed out an opening-game 4-3 overtime win over the Greyhounds on Thursday night at the GFL Memorial Gardens.

The start made a difference in the contest as the Greyhounds had to battle back from a 3-1 deficit to force overtime before Maksim Sushko scored the game-winner in the extra frame.

“They caught us on our heels, there’s no doubt about that,” said Greyhounds coach John Dean. “We got better as the game went on but that’s the nature of the playoffs. You have to play a full 60 minutes and in this case 80 minutes.”

“In the second half of the game we had a lot of good pressure and a lot of good opportunities,” Dean also said. You could feel like it was starting to tilt in our favour. When you start slow like that and the other team is grinding and they’re getting their faces in front of shots and blocking shots, They built some confidence. They went to the wall for their goaltender.”

Owen Sound coach Alan Letang said he was proud of his team following the win.

“We talked about the little things you need to do in the playoffs like blocking shots and being desperate,” Letang said. “We knew they were going to have their pushes and we buckled down when they had that pressure on. We’ve got a lot of ice bags in (the dressing room) and that’s usually what it takes to win a playoff game.”

UP NEXT;
Game 2 of the Western Conference Quarter-Final Series between the Greyhounds and Attack goes this Saturday, March 23rd (7:07 PM) at the GFL Memorial Gardens.

Great seats are still available by visiting the GFL Memorial Gardens Box Office, presented by SK Group, Friday 10 AM to 5 PM, Saturday 10 AM through game time or online at www.gflgardens.ca or by phone at 1.866.775.9422.