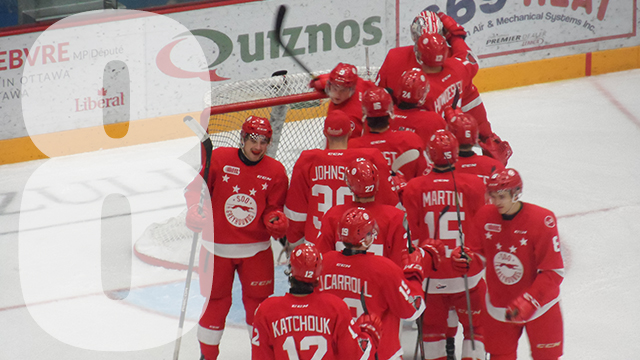 SUDBURY, ON-
They skated for over forty-five minutes scoreless, before cueing up the shorthanded success.
Unable to beat Jake McGrath through the first two periods on Friday Night despite a dominant effort, the Soo Greyhounds used a pair of third period shorthanded goals to blank the Sudbury Wolves.

Their third win in four starts against their Northern rivals, and their eighth overall in a row.

Just over seven minutes to go in the first period a give-and-go between JACK KOPACKA and KEEGHAN HOWDESHELL ended in the quick release by KOPACKA gloved down by Jake McGrath.

Then with under two minutes to play, Captain TIM GETTINGER’s pass was tipped over the net by HAYDEN VERBEEK who was parked next to the left post.

Despite outshooting the Wolves 15-9 in the penalty-free first period, the Greyhounds and their Northern neighbours skated into the dressing room scoreless after twenty minutes.

Two powerplays and a 12-2 shot advantage in the second period still left the  Greyhounds  empty handed for another period.

The Greyhounds entered the third period with a 5-0-1-0 record when tied after forty-minutes.

After successfully killing off a penalty late in the second period, the Greyhounds would be on the receiving end of the first two penalties in the third period.  But this time they thwarted the Wolves and notched two shorthanded goals.

Under seven minutes gone in the period (6:57), BARRETT HAYTON pressured a Sudbury defenceman who fell deep in the Wolves zone leaving the Hounds centreman the puck to dish out to JACK KOPACKA who ripped a shot overtop McGrath for the 1-0 lead.

Then about seven minutes later (13:38), HAYDEN VERBEEK chipped the puck out of the Greyhounds zone where TIM GETTINGER raced up the left wing, and positioned himself a step ahead of the Wolves before cutting to the net and backhanding home the 2-0 lead.

The Greyhounds would limit Sudbury to just four shots in the third period, and a season-low sixteen against in the game en-route to their seventeenth victory of the season (17-3-2-0).

It was the Hounds second shutout of the year, and first of the year for MATTHEW VILLALTA.

UP NEXT;
For the first time in nearly three weeks, the Greyhounds return home this coming week for three games.

The home stand begins on Wednesday, November 22nd against the Sudbury Wolves.
Puck drop inside the Essar Centre is set for 7:07 PM.

Great seats are available at the SK Group Box Office (inside the Essar Centre) during regular business hours of 10 AM to 5 PM Monday to Friday, 10 AM to 2 PM Saturday or you can order conveniently online at www.essarcentre.ca or by phone at 1.866.775.9422.