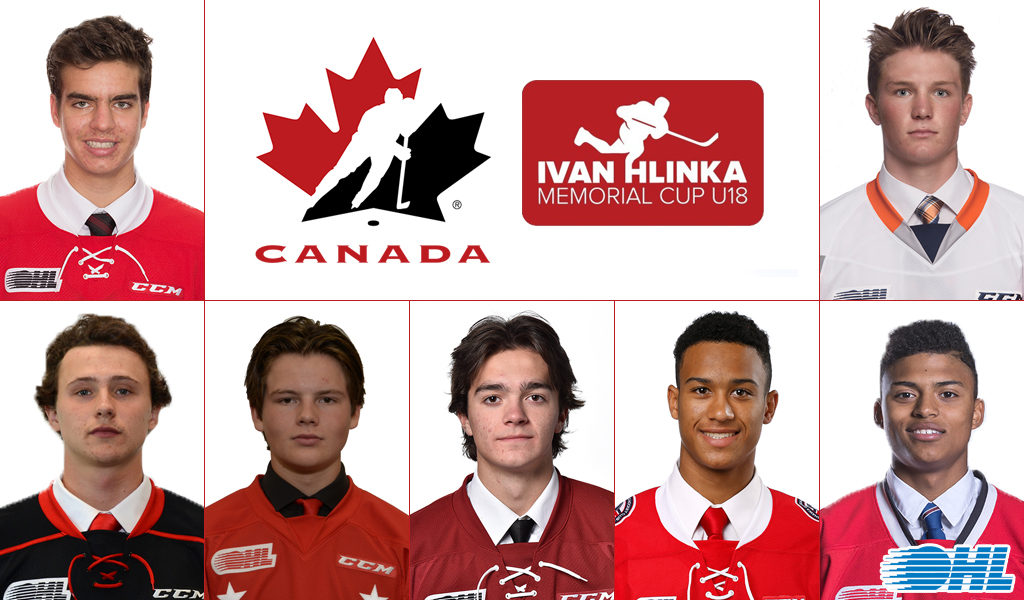 CALGARY, Alta. – Hockey Canada has wrapped up its five-day National Men’s Summer Under-18 Team selection camp by naming seven OHL players who will represent the nation at the 2017 Ivan Hlinka Memorial Cup Aug. 7-12 in Breclav, Czech Republic, and Bratislava, Slovakia.

All but two of the 21 CHL players named to the roster represented their country at the World Under-17 Hockey Challenge – an international tournament hosted annually in Canada that features three Canadian teams (Red, White, Black) and five international teams. Canada’s team also includes 15 CHL players who’ve worn the red-and-white in international competition overseas – six having donned the Team Canada jersey at the 2017 IIHF U18 World Championship in Poprad and Spisska Nova Ves, Slovakia, in April (Dellandrea, Gravel, McIsaac, Smith, Thomas, Woo); and 11 having competed for Canada at the 2016 Winter Youth Olympic Games in Lillehammer, Norway (Burzan, Dudas, Fortier, Gravel, Groulx, MacDonald, McIsaac, Merkley, Rodrigue, Smith, Woo). Joe Veleno (Saint John Sea Dogs) returns to the line-up as the only Canadian player to have represented Canada twice at the Ivan Hlinka Memorial Cup, having been part of the 2016 team.

“We’ve had a great selection camp here in Calgary, with all 44 players showing us what they’re made of,” said Brent Kisio (Lethbridge Hurricanes), head coach of Canada’s National Men’s Summer Under-18 Team. “As a best-on-best tournament, the Ivan Hlinka Memorial Cup allows us to showcase the very best Canadian talent in this age group. We are ready to make Canadians proud with how we represent them on and off the ice.”

Canada has won gold 20 times in 25 years of summer under-18 competition and will play in Group B this year with Finland, Russia, and Slovakia; Group A consists of the Czech Republic, Sweden, Switzerland, and the United States.

The Canadians will face the Czech Republic in a pre-tournament game on Aug. 5 in Breclav, and officially open the 2017 Ivan Hlinka Memorial Cup on Aug. 7 against Russia. The top two teams from each group advance to the semifinals on Friday, Aug. 11, with the gold-medal game scheduled for Saturday, Aug. 12.

In addition to sending its players and team staff to the Ivan Hlinka tournament, members of Hockey Canada’s events department will join representatives from Oilers Entertainment Group, the City of Edmonton, and Tourism Edmonton as the groups prepare to host the 2018 Ivan Hlinka Memorial Cup.

As announced last November , Hockey Canada, the Czech Ice Hockey Association, and the Slovak Ice Hockey Federation have struck a partnership to host the prestigious summer hockey staple on Canadian ice on a bi-annual basis. Edmonton will host the tournament in 2018, 2020, and 2022.

The Ivan Hlinka Memorial Cup is traditionally held in August, and Hockey Canada expects the regional economic impact of hosting in Edmonton could top $5 million based on the results from hosting similar events of this size and scope.