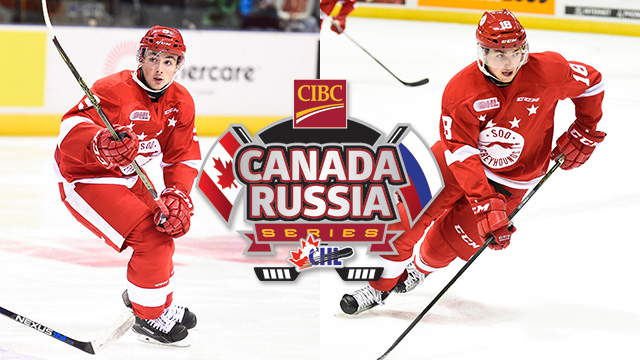 Toronto, ON – The Ontario Hockey League in association with the Canadian Hockey League, the North Bay Battalion, and the Hamilton Bulldogs hockey clubs today announced the Team OHL rosters for the 2016 CIBC Canada Russia Series.

Team OHL will compete against the Russian National Junior Team in Game 3 of the series in North Bay on Thursday November 10, with Game 4 to be played in Hamilton on Monday November 14.  The series also includes two games in the Western Hockey League prior to both OHL games, and ends with two games hosted by the Quebec Major Junior Hockey League.

Both 2016 CIBC Canada Russia Series hosts will be represented by hometown players including Vancouver Canucks prospect Brett McKenzie of the North Bay Battalion, and Montreal Canadiens prospect Will Bitten of the Hamilton Bulldogs.

In 13 years of competition against the Russian National Junior Team, the OHL has a record of 22-3-1 in this series following 2015 victories of 3-0 and 2-1 in Owen Sound and Windsor respectively.

The CHL Canada Russia Series has been an integral part of the identification process for Team Canada for the past 13 years prior to the IIHF World Junior Hockey Championship.  The event features a team of CHL All-Stars representing each of the three regional leagues competing against the Russian National Junior team.

The 2016 CIBC Canada Russia series is supported by title sponsor and Official Bank of the CHL, CIBC, and CHL associate sponsors Cooper Tire, autoTRADER.ca and Sherwin-Williams.  All games will be broadcast nationally on Sportsnet and TVA Sports.

For event information including how to purchase tickets please visit www.chlcanadarussia.ca.