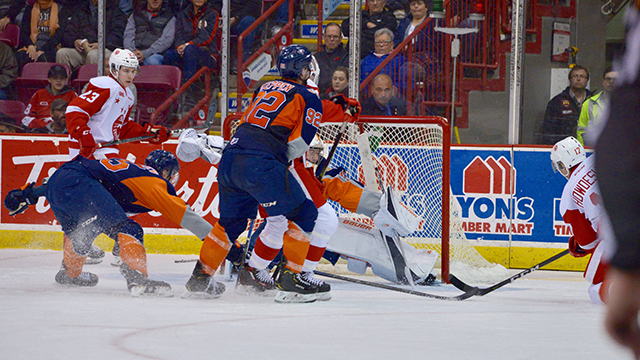 After the first period on Wednesday, GFL Memorial Gardens turned into GFL House of Horrors for the Flint Firebirds.

The Soo Greyhounds scored five goals in the middle stanza and three in the third, helping erase what, at one point, was a 2-0 Flint lead.

The Hounds went on to a convincing 9-3 victory before a Halloween night crowd of 3,396.

“We’re pretty explosive when we get going,” said Hounds defenceman Jordan Sambrook, who scored twice and set up another as his team outmatched the short-staffed Firebirds, dropping Flint to 0-14-1-0 on the Ontario Hockey League season. “We got our legs under us beginning in the second period and we started playing our system.”

“We’re pretty quick when we have the puck and make smart decisions,” added winger Keeghan Howdeshell, who notched his 10th goal of the season and added an assist. “That’s what we did over the final two periods.”

After watching his team improve to 11-3-3-0, while stretching its unbeaten-in-regulation streak to seven games, head coach John Dean spoke of how “we’re a pretty-exciting team when we get going. I just wish we were talking about playing well for 60 minutes and not just 40.”

Dean admitted his team took the struggling Firebirds lightly. The Hounds came out slowly and had just two shots on goal over the first 11 minutes.

“We’re extremely honest with our players and we’d be feeding you (reporters) a line if we didn’t say that,” said Dean, whose club is slated to entertain Guelph on Friday (7:07 p.m.) and Erie on Sunday (2:07 p.m.).

GAME NOTES:
• Greyhounds’ forward DOMINIC MUFARREH recorded his 1st-career OHL goal at 9:10 of the second period.  That goal proved to be the game-winner on Wednesday night.
The Livonia, MI product was the club’s 7th Round selection of the 2018 OHL Priority Selection.
• Hounds scratches were 12 Tye Kartye (upper body), 13 Roman Pucek (lower body) and 21 Ryan O’Rourke (U17 Hockey Challenge)
• Eight different players contributed goals, while fifteen players recorded atleast a single point in the division match-up.  Offense was led by Jordan Sambrook (2G, 1A), Rory Kerins (1G, 2A) and Barrett Hayton (1G, 2A)

UP NEXT;
It will be a match-up between two division leaders this Friday Night (Nov. 2) when the Greyhounds host the Guelph Storm.
The Hounds pace the West Division while the Storm are the Midwest Division leaders.  This will be the team’s second meeting head-to-head in less than a week.

Game time is 7:07 PM at the GFL Memorial Gardens.

To view complete details on the jersey’s and the online blind auction CLICK HERE.