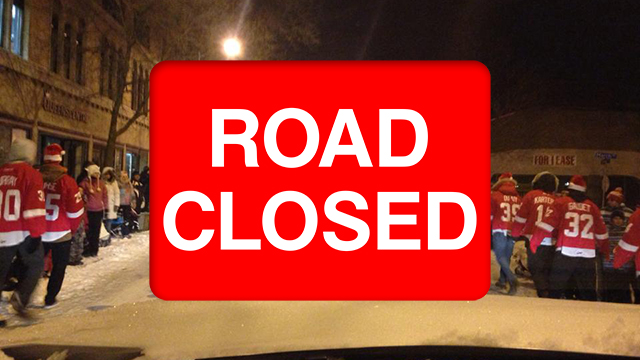 (The Soo Greyhounds have been asked to pass along this information courtesy of the Sault Ste. Marie Police Services)

On Saturday November 19th, 2016 the Rotary Santa Claus Parade will take place in the downtown.

The parade itself starts at 6 PM however, several road closures will take place prior to the commencement of the parade.

The Sault Ste Marie Police Service wishes to advise motorists to expect traffic disruptions in the downtown core between the hours of 5 PM and 8 PM due to the parade.

Bay Street will be closed from Brock Street to Pim Street starting at 5 PM to 6:30 PM to allow for the staging of the parade floats.

Queen Street East will be closed to traffic from Pim Street to Gore Street starting at 5:30 PM until approximately 8 PM to facilitate the parade.

Those attending the downtown area for such events as the Greyhound Game (vs HAM, 7:07 PM) should be aware of the parking restrictions on Queen and use Carmen’s Way to Bay St., as Queen St. will be closed for the duration of the parade.

Once the parade commences at 6 pm no vehicles will be allowed to cross or drive on Queen Street East with the exception of the parade participants.

No parking will be allowed on Queen Street East between Pim Street and Gore Street after 4 PM.

Cars not moved during the temporary parking ban will be towed for the safety of the parade participants and the viewing public.

During the time of the parade drivers are reminded to use caution due to the large amount of pedestrians including excited children that will be in the downtown area enjoying the parade.

Thank-you for your understanding and co-operation.