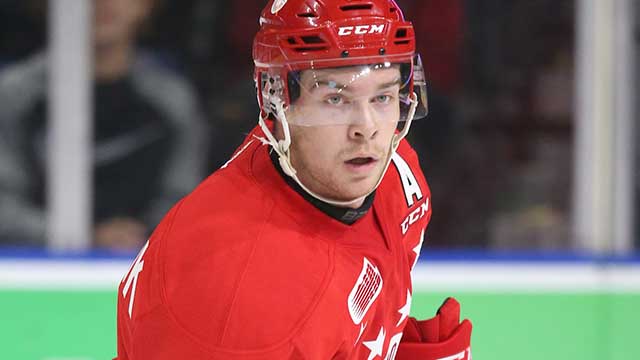 LONDON, ON-
They were two teams that hadn’t met since very early in the Ontario Hockey League season.

And on Friday Night at Budweiser Gardens in London, the top two teams in the Western Conference reacquainted themselves when the Greyhounds and Knights squared off for just their second meeting of the year.

Both clubs were fresh off overtime victories twenty-four hours prior, and both had made roster acquisitions earlier in the day.

And as the plot thickened, each side in this battle of division leaders saw each holding two separate leads before eventually needing overtime for the extra point.

Greyhounds’ newcomer JADEN PECA wasted little time getting acclimated with his surroundings providing the visitors a quality chance on his first shift of the game.

Just before the midway point of the period London’s Liam Foudy was set-up streaking in the middle but had that opportunity foiled by a solid defensive play by RYAN O’ROURKE who deflected the attempted shot high and out of play.

The Knights would open the scoring with just four seconds remaining on a powerplay over twelve minutes into the game.
MATTHEW VILLALTA would make an enormous sprawling pad save on the initial cross ice feed to Nathan Dunkley, but the rebound was there for the Knight to quickly pounce on for a 1-0 Knights lead.

Unable to capitalize on their first powerplay of the night, the Hounds would rely upon VILLALTA after that man advantage expired as an errand centering pass left the Knights on a 2-on-0 where William Lochead was denied to keep the deficit at a single goal.

JACOB LEGUERRIER would pull the Greyhounds’ even in the dying seconds of the first period.
Scoring his 3rd goal in the last 5 games, LeGuerrier started off the play with an initial shot on Jordan Kooy and then went to the net where he would backhand the puck overtop the London netminder at 19:54 for a 1-1 game.

MATTHEW VILLALTA stood tall turning aside 13 of the 14 shots he faced in the first period.

Early in the second period, London would take their second lead of the game.
Matvey Guskov used his speed around a Hounds defence and backhanded home his 7th goal of the season for a 2-1 London lead.

Later a rare moment when the Greyhounds skated in on a 5-on-1 that saw KEEGHAN HOWDESHELL set-up MAC HOLLOWELL who was denied by the glove of Kooy.

The Greyhounds continued to press near the midway point of the period for the equalizing goals including solid shots from blueliners JORDAN SAMBROOK and ANTHONY DEMEO to no avail.

London would find themselves in penalty problems at the midway point of the period where the Greyhounds would benefit from back-to-back two man advantages.
On their first 5-on-3, COLE MACKAY would get the rebound at the right of the goal and along with notching his 14th goal of the year, pulled the Hounds into a 2-2 tie.
The goal was redemption from an earlier moment where his redirection in front of the London goal went off not one, but both posts to remain out. 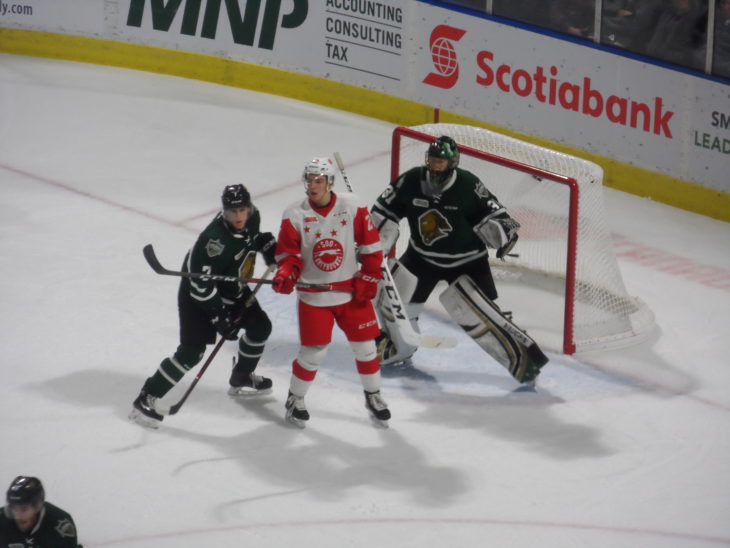 With 1:50 to play in the period, the Greyhounds would take their first lead of the night.
TYE KARTYE stepped on the ice, fresh from the Greyhounds bench, and was dropped the puck where he fired a low shot home for his 2nd goal of the year and a 3-2 Greyhounds lead.

Hounds would hold a thirty-nine second powerplay to start the third period but the score remained.

Shortly thereafter London would notch their second powerplay goal of the night, to make it a 3-3 game when Kevin Hancock scored his first since being acquired by London earlier in the day.

Midway through the third period RYAN ROTH set-up ALEX JOHNSTON, and the speedy forward was in alone but lost his footing but the play remained in the offensive zone.
That’s where Roth got the puck on the right wing wall and fired a shot that Kooy got a piece of, but not enough, and the Ladue MO product regained the Greyhounds lead, now 4 to 3.

Alec Regular squeaked a shot past MATTHEW VILLALTA with just 2:32 to go in regulation to force overtime for both teams for the second consecutive night.

With the extra point on the table, OA defenceman JORDAN SAMBROOK went coast-to-coast at 2:25 of overtime, stepped away from a Knights defenceman and fired home his 12th goal of the season to secure the Greyhounds the 5-4 victory over London.

The victory improved the Greyhounds to 24-9-4-1, good for 53 points, and perfect 2-for-2 against the Knights this season.

UP NEXT;
The Greyhounds conclude their weekend with a Sunday afternoon matinee (Jan. 6) against the Flint Firebirds.
Game time from the Dort Federal Event Center is 2 PM.

The game will wrap up the season-series between the two West Division opponents, as the Hounds hold a 4-1-0-0 record against their I-75 counterpart thus far.