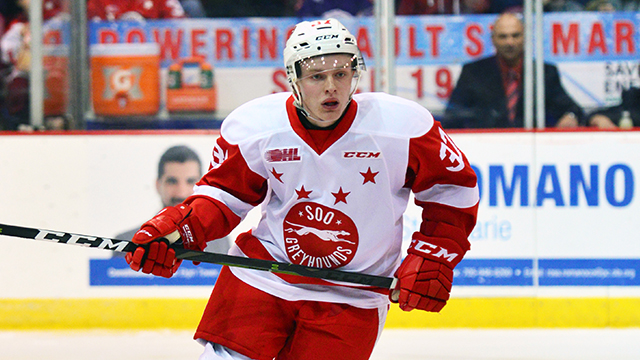 It was hard to wipe the smile off Ryan Roth’s face on Wednesday night and for good reason.

The sophomore forward had a career night as the Soo Greyhounds skated to a 7-2 Ontario Hockey League win over the Flint Firebirds Wednesday at the GFL Memorial Gardens.

Roth had a pair of power play goals and finished the night with three goals and two assists to lead the Greyhounds to victory.

“It feels great,” Roth said. “I have to give credit to my teammates. They’re great guys and they made some great plays to me and I was fortunate enough to put them in the net.”

“I’m really happy for him,” said Greyhounds Coach John Dean. “He gets the short end of the stick a little bit on special teams because the big unit gets the big minutes and the second unit doesn’t get as much.”

“When he gets his opportunities, to see him score like he did tonight, it was exciting for me,” Dean added.

The Greyhounds scored three times on the power play in six attempts and the team has scored at least once on the man advantage in nine of its last 10 games and sits fourth in the league, converting at a rate of 25.2 per cent.

UP NEXT;
The Greyhounds continue their week inside the GFL Memorial Gardens this Friday, December 7th with the final regular season visit by the Guelph Storm.
Game time is 7:07 PM.

Fans can purchase tickets at the GFL Memorial Gardens Box Office, presented by SK Group, Thursday 10 AM to 5 PM or Friday 10 AM through game time, or online at www.gflgardens.ca or by phone at 1.866.775.9422.