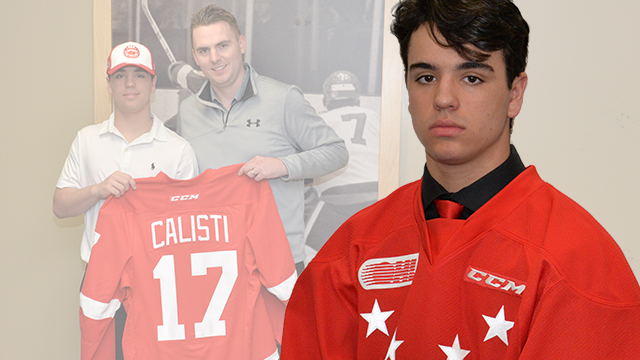 Soo Greyhounds General Manager Kyle Raftis is pleased to announce this afternoon the commitment from 2017 draft pick ROBERT CALISTI.
The Toronto, ON native was the Greyhounds’ 3rd Round Pick (2nd overall by the club) in this past April’s OHL Priority Selection.

“We are very excited to welcome Robert and his family to the program. What makes Robert one of the top offensive defencemen in this age group is his ability to push the pace with his skating and puck movement” began Hounds GM Kyle Raftis.

“Combined with an elite shot from the blueline and tenacity on the defensive side of the puck, we are very excited to be a part of Robert’s future hockey and academic successes” he added.

The 5.09, 172-lb defenceman played one season ago with the Toronto Nationals Minor Midget hockey club.
In 33 regular season games played, Robert had 5 goals and 15 assists (20 points) with the Nationals before adding 3 points (1g, 2a) in 7 games played at the OHL Cup.

Most recently, Calisti rounded out the OHL Gold Cup earlier this month as the highest scoring defenceman in the tournament.
In 5 games he notched 5 assists including 2 power play points.

“I’m extremely excited to be a part of the Soo Greyhounds.  They are a great organization and I’m thankful for the opportunity they have given me.  I’m looking forward to getting started” said Calisti.