Richardson and the Rangers down Hounds 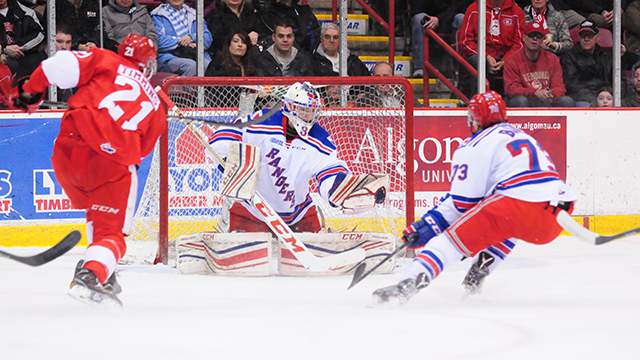 SAULT STE. MARIE, ON-
When the Soo Greyhounds score less than two goals in a game, they are now 0-12-0-0 this season.
Friday Night was one of those nights.

Despite firing thirty-nine shots on the Kitchener Rangers net, the Hounds saw the visitors score four unanswered goals while evening their season series at one win a piece.

The locals came out of the gates with pace similar to the week’s opening game on Wednesday and had built up a 6-1 shot advantage in the opening six minutes of the game.
Along with that pressure, defenceman GUSTAV BOURAMMAN had two chances where he was given room to skate deeper in the Rangers zone and test netminder Luke Richardson.

All-in-all the Hounds outshot Kitchener 10-8 in a scoreless first period.

“I thought early in the game we played well.  Did a lot of things good.  We weren’t able to generate a lot of secondary chances, not a lot of traffic on the goal, we did get a lot of shots but he wasn’t able to see them” commented Head Coach Drew Bannister on his clubs inability to get that first period goal.

BARRETT HAYTON would strike first for the Hounds at 5:56 of the second period.
The first-year forward took skated in through some open ice and fired home his 7th goal of the year for the 1-0 lead, assisted by CONOR TIMMINS and DAVID MILLER. 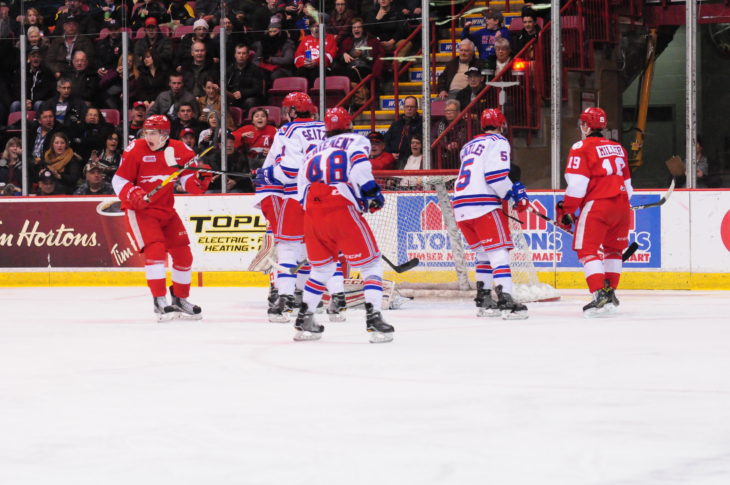 Kitchener would respond in short oder, replying just 1:10 later.
Riley Damiani got around the Greyhounds defence off the left wing and put the puck past JOSEPH RAAYMAKERS to pull the visitors even.

Five minutes later (12:24), RAAYMAKERS came out of his net to stop a dump in and the puck bounced and ended up out front where Greg Meireles deposited the puck into the empty cage for a 2-1 Rangers lead.

“There’s not a lot of time or space out there.  It’s a game of inches and a goal like that can change the game and it certainly did.  I thought he made some good saves, but overall he was just OK and that was a big difference in the game that goal” said Bannister of his starting netminder.

Later in the period RAAYMAKERS would be called upon and turned aside Connor Bunnaman on a 2-on-1 sliding across to make the save, and limit the Hounds deficit to 2-1 heading into the third period.

Bunnaman would later get on the board to extend the Kitchener lead.
Nine seconds after killing off a Kitchener powerplay to start the third period (0:52), and odd man rush saw the puck placed to the Rangers centreman who backhanded the puck home for his 29th goal of the year and a 3-1 lead.

Scoring would conclude at the 8:09 mark of the period when an offensive zone turnover moved up ice.  As Kitchener entered the zone Nick McHugh fell but moved the puck to Joseph Garreffa who fired a shot upstairs for the 4-1 Rangers win.

Despite outshooting the Rangers 39-22 in the contest, the Hounds dropped the contest and saw their record fall to 38-15-2-1 on the year.

“A lot of the same.  I don’t think we played a bad hockey game, I thought we did a lot of things good.  We have to create offense, one goal probably isn’t going to win you enough games” began Bannister when asked what his primary message is following the game.

“We have to tighten up on the odd man rushes, they had a couple and late in the game one or two ended up in the back of the net.  We have to be a bit more responsible when we’re behind too, we don’t want to put ourself behind where it’s out of reach” he concluded.

GAME NOTES
• Defenceman Mac Hollowell returned to the Hounds line-up after missing the last four games due to injury.  The Niagara, ON product was paired alongside Anthony Demeo on the blueline

• The crowd of 4,355 was a season-high for the Hounds this season

• Both teams ended the night 0-for-3 on the powerplay

UP NEXT;
The weekend concludes for the Hounds TOMORROW NIGHT (Sat. Feb 18) when the Greyhounds host the Niagara IceDogs.

Game time is 7:07 PM and is presented by the Canadian Mental Health Association.