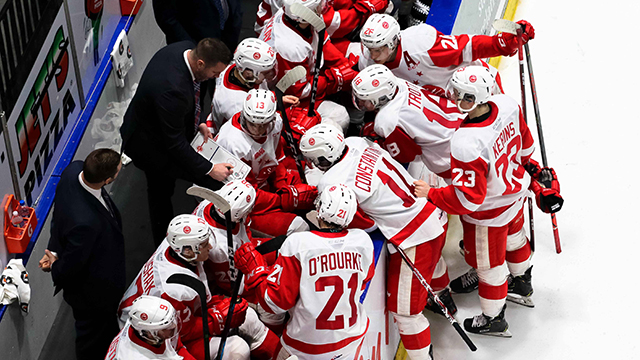 SAGINAW, MI-
A night after their the trio of Cole Coskey, Cole Perfetti and Ryan Suzuki combined for 10 points against the Hounds, it would be Saginaw’s ‘supporting cast’ doing the damage Saturday Night.

Shaking off a early second period goal by the Greyhounds to tie the game, Saginaw went on to score the final four goals of the game to complete the sweep of the home-and-home series this weekend.

ZACK TROTT was involved in two of the Greyhounds’ best chances of the opening period, including to start things off in the opening minute.
The veteran forward was recipient of a perfect long pass that had Trott streaking along in on Spirit netminder Marshall Frappier.  And while Trott had the netminder beat through the five-hole, he couldn’t beat the left post and the game reamined scoreless in the opening stages.

Just like they did twenty-four hours earlier, Saginaw would get their first goal of the game scoring on a powerplay.
The Hounds got caught flatfooted, leading to a perfect lane to the goal by DJ Busdeker.  The overager would be on the receiving end of a slash, which resulted on the Saginaw man advantage.
Busdeker ironically would connect to open scoring with just thirty-two seconds left in the powerplay when he roofed a puck over NICK MALIK from the left face-off circle for the 1-0 lead.

After being unable to even the game on a powerplay of their own, the Greyhounds had another chance in the final minute when ZACK TROTT skated end-to-end and set-up JAROMIR PYTLIK a path to the goal alone.
Pytlik would try to go low on Frappier but would be denied to keep the Hounds off the board.

Saginaw would outshoot the Greyhounds 11-4, while holding a 1-0 lead after twenty minutes.

Just seventeen seconds into the second period the Greyhounds would get a spark when they pulled on even terms thanks to a goal by veteran blueliner JACOB LEGUERRIER.
With the puck to the right of Marshall Frappier, ZACK TROTT reversed the play back behind the Spirit goal to LeGuerrier who lit the lamp for his 5th goal of the year, and a 1-1 tie.

Saginaw responded less than two minutes later when after NICK MALIK made the first save, Danil Antropov was to his right to put home his 9th goal of the season and give the Spirit a 2-1 lead.

Ten minutes later, and seconds after a Saginaw powerplay expired, the Spirit would increase their lead to 3-1 thanks to Blade Jenkins.
With Saginaw still outnumber the Hounds in their own zone, a defenceman was step behind thus leaving Jenkins alone for a redirection that MALIK had no chance on, and the deficit was deeper.

Down by a pair of goals but on the powerplay, ZACK TROTT tried again to contribute when he patiently faked a shot on the Saginaw goal and with Frappier down on his stomach, tried to tuck the puck around and past his right legs to no avail.

Saginaw added one more goal with under two minutes to play when Blade Jenkins finished off a play that initially started as an oddman rush, and Saginaw took a 4-1 lead into the dressing room after two periods of play.

The Greyhounds would have 1:47 on a powerplay carry over to the third, and then almost immediately go back on the man advantage but were unable to take advantage.

Neither could Saginaw on a pair of man advantages of their own throughout the period.

The final goal of the game came with just under five minutes to play in regulation, and the Hounds on their final powerplay of the game.
After an offensive zone turnover by the Greyhounds, DJ Busdeker beat his man towards Nick Malik and buried a feed from Damien Giroux for 5-1 final.

For the first time in a month, the Greyhounds drop below .500 with their record falling to 20-21-2-0, good for 42 points.
The club remains in 4th in the West Division and 9th in the Western Conference.

UP NEXT;
The Greyhounds return to home ice this coming Wednesday, January 22nd when they host the Flint Firebirds for the 5th meeting in the head-to-head season series.
Thus far Flint holds the advantage having won three of the four previous contests against the Hounds.

Game time at the GFL Memorial Gardens is set for 7:07 PM.