MENU
THANK-YOU to all of our fans, sponsors, billets, staff, players and their families for your contributions to our 50th Anniversary Season!
January 15, 2022 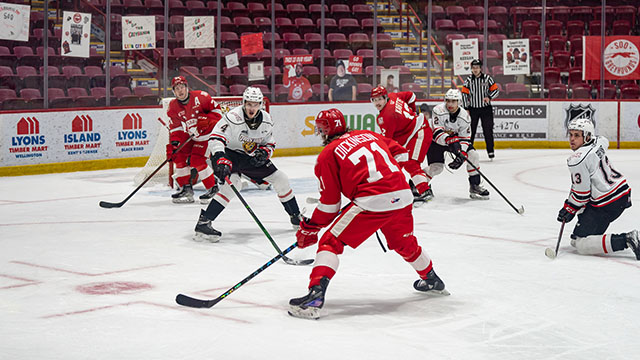 Like a bulked-up muscle, the Soo Greyhounds flexed their special teams’ prowess on Saturday.

The Hounds scored three times on the power play and once shorthanded, en route to a 5-2 victory over the Owen Sound Attack at GFL Memorial Gardens.

Power-play markers by Rory Kerins, late in the second period, and newcomer Keegan McMullen, early in the third, turned a 3-2 lead into a comfortable cushion.

With the victory, the Hounds lead is four points over both Windsor (16-10-2-2) and Flint (17-12-0-2) in the race for top spot in the West Division. The Spits have three games in hand on the Soo while Flint has played two fewer games than the Hounds have.

“The PK has been really strong over the last 10-12 games,” Dean continued. “And the power play has been strong all year.”

Special teams’ success “can change the game for sure,” said Kerins. “Coming down the stretch, special teams will be really important.”

Tanner Dickinson, who had a short-handed goal and two assists, talked of how special teams’ play is an area the Greyhounds take pride in.

“We were able to use each other and we were all involved tonight,” added Dickinson, whose club continues to lead the Ontario Hockey League in power-play efficiency. “Special teams have been a big part of our team this season.”

The Hounds were 3-for-7 on the power play on Saturday and, going into Sunday’s action, they’ve converted 42 of 136 man-advantage opportunities. That’s a success rate of 30.9 per cent.

With the home team leading 3-1, Sault native Nick Porco found himself alone in front of the Hounds net when spotted by teammate Cedrick Guindon.

Porco beat Hounds goalie Tucker Tynan high to the blocker side to make it 3-2 at 16:23 of the second period.

But after Attack defenceman Mark Woolley was assessed a double-minor, nailed for cross-checking and being the instigator in a fight with Tye Kartye, the Greyhounds made him pay.

The Hounds converted on both penalties to take control of the game.

Through traffic, Kerins snapped home his 20th of the season, beating netminder Nick Chenard at the 19:53 mark.

McMullen then poked home a rebound at 1:43 of the final frame for another power-play tally and a 5-2 advantage.

The two power-play markers “were critical for sure,” said Kerins, who boosted his stat line to 20-34-54. “That’s a couple of times this year we’ve taken advantage of four minutes in penalties. That can really change a game.”

While Walters spoke of how Woolley “wanted to protect a teammate,” the coach also noted how costly the two minors were, saying they occurred “in the wrong place at the wrong time.”

Ryan O’Rourke also had a power-play goal for the winners while Tanner Dickinson, following a slick setup from Cole MacKay, added a short-handed marker.

Dickinson and O’Rourke finished with a goal and two assists each on a night when the Soo held a 38-15 edge in shots.

Fifteen shots are the fewest the Soo has permitted this season.

Logan LeSage had the other goal for the Attack, trimming the Soo’s lead to 2-1 midway through the second period.

“Our captain played his best game since he’s been back,” Dean said of O’Rourke, referring to the  defenceman’s recent return from the World Junior Championship.

Rob Calisti added a goal, his 12th for the OHL lead among defencemen, and an assist.

“I was pretty impressed by how seamlessly they entered our lineup,” Dean said of the recent additions. “It shows the strength of our leadership group.”

The Hounds were fresh from a frustrating weekend performance against the Windsor Spitfires, dropping 5-2 and 10-4 decisions here last Saturday and Sunday.

Kerins spoke of how “we all know we had something to prove after the two games against Windsor. From the drop of the puck, we were all over them tonight.”

Calling the Greyhounds opening period “great,” Dean noted how such a start, following last weekend’s struggles, “says a lot about the character of our team.” 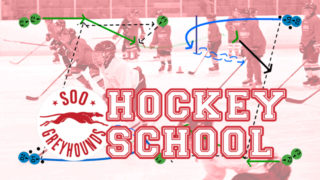 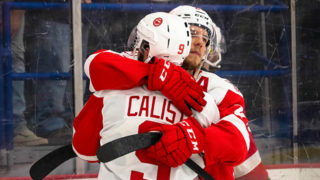 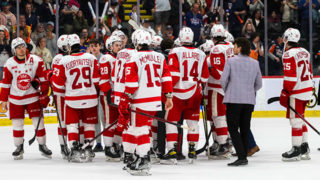 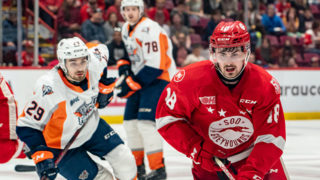 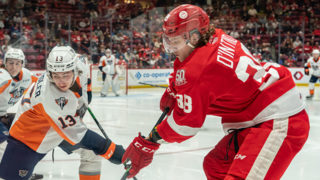