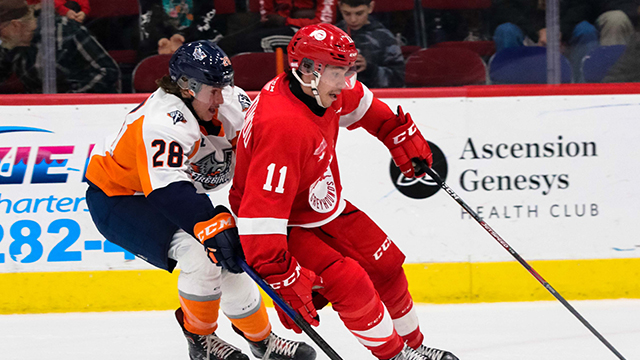 FLINT, MI-
For the second game in as many nights, the Soo Greyhounds dug themselves in hole.
This time around though, they got within a single goal and probably deserved a better fate.

Visiting the Dort Federal Event Center in Flint for the final time this regular season, the trend of the home team being victorious in the season-series continued.

Things began with an opening minute turnover that resulted in BAILEY BRKIN turning aside Ty Dellandrea, making up one of the Greyhounds netminders 14 saves on 16 shots in the period.

Flint would open the scoring just over two minutes in when Riley McCourt beat a Hound at the wall and opened up a lane to the net before backhanding a shot through traffic for a 1-0 Firebirds lead.

Just under two minutes later (1:59) the Hounds would pull on event terms.
BILLY CONSTANTINOU made the backpass to JACOB HOLMES at the blueline, where the 1st-year Hounds wristed a shot past Luke Cavallin to tie the contest.
The goal marked Holmes 2nd goal of his career.

Greyhounds would find themselves shorthanded twice in the period, and on the first 5-on-4 situation Flint would retake the lead.
Before the midway point, (9:39), Ethan Keppen was in tight and pounced on a rebound to BAILEY BRKIN’s left, and beat the sprawling netminder for a 2-1 lead.

Less than a minute into the second period Flint would generate a glorious chance, and then capitalize as a follow-up.
Thirty-seconds in BAILEY BRKIN robbed Evgeniy Oksentyk to the right of the goal.

Twenty-second later Flint entered the zone on a 3-on-1 and a three way passing play was finished with Jack Wismer tipping home the goal from the slot, and a 3-1 Flint lead.

Midway through the period Riley McCourt diving at the side of the goal notched his second of the night and increased the Greyhounds deficit to 4-1.

Back-to-back goals by the Greyhounds in the second half of the period would put them back in the game.
At 12:30 JAROMIR PYTLIK dug the loose puck from the pads of Cavallin and buried past the downed goalie for his 10th goal of the year.
Four minutes later JACOB LEGUERRIER’s point shot hit a body and dropped where TYE KARTYE was to swipe the puck into the empty cage to make the deficit a single goal while extending his personal goal-scoring streak to five games,.

PYTLIK and KARTYE each had a pair of points in the period to remain tied in the team scoring race, while they and the Hounds outshot Flint 20 to 8 in the period.

Starting the third period 4-on-4, the Greyhounds held the upper hand and had good momentum to start.

The first serious test from either side came less than five minutes into the period when BRKIN was called upon to keep his team close, denying Ty Dellandrea with back-to-back saves in close.

Each team would eventually record eleven shots on goal, and have a powerplay in what was a scoreless third period of play.

UP NEXT;
The Greyhounds will be looking to cap off the weekend on a positive note when they are back in action this Sunday, November 24 at Sarnia.
Game time against the Sting is 4:05 PM from the Progressive Auto Sales Arena.