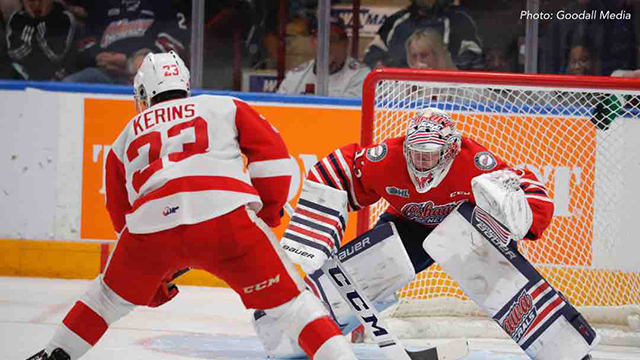 OSHAWA, ON-
The first two times the Greyhounds’ have went beyond sixty-minutes this season they haven’t got the result they wanted.
Friday Night was different.

Starting off a three-game trip in Oshawa, the Hounds earned two very valuable points and swept the series with the Generals in the process.

One deficit was overcome and later a lead was relinquished.  All-in-all they may not have made it as easy on themselves, but the Greyhounds pulled through to start the trip on a positive note.

Oshawa would hold the only two powerplays of the period, coming in the first eight minutes of the game.  Both teams specialty teams would factor in during this time.

On their first man advantage, the Generals would the scoring when a rebound came of BAILEY BRKIN and redirected off RYAN O’ROURKE and into his own goal.
Brett Harrison would be credited with the goal.

Then with the Greyhounds’ shorthanded a second time, RYAN O’ROURKE cleared the puck out of his zone where it hit a General and dropped.  Overager JADEN PECA skated hard to the puck creating himself a breakaway where he beat Jordan Kooy to tie the game.
O’ROURKE and BRKIN had assists on Peca’s 15th goal of the season.

Just past the midway point the Greyhounds took their first lead of the game when TYE KARTYE slick hands brought the puck over the line and deep into the zone where KALVYN WATSON beat Kooy low for a 2-1 Hounds advantage.
That was the 2nd goal of the season for Watson, and his first since back on October 27th.

The lead lasted until the final minute, when a couple missed assignments and Oshawa’s leading-scorer Philip Tomasino was in the slot and redirected home the game-tying goal for a 2-2 game after twenty minutes.

After the last minute goal in the first, Oshawa looked for another timely goal when a 2-on-0 developed for them in the opening minute but they were unable to convert.

The Greyhounds took their first lead of the game at the 7:05 mark, and subsequently chased Jordan Kooy from the Oshawa net when JAROMIR PYTLIK payed the price at the side of the goal, and got a piece of a shot that trickled through for a 3-2 Greyhounds lead.
Leading scorer ZACK TROTT and ROBERT CALISTI picked up the assists.

Both teams would enjoy powerplay time in and around the midway point of the period, but the scored remained unchanged.

A JADEN PECA attempted pass at 14:25 appeared to give the Hounds a two goal cushion when it went off a Oshawa stick in front and behind Zachary Paputsakis.
A review deemed the play off-side and saw the goal waved off.

With under two minutes to go in the period, RYAN O’ROURKE fired home his 7th goal of the season, to ensure a two goal lead after twenty minutes (4-2), with PECA and ALEX JOHNSTON having the helpers.

The Greyhounds outshot Oshawa 20 to 7 in the period.

Oshawa headed to the powerplay just seconds into the third period, and struck just as quick.
Brett Neumann from the slot made it a one-goal game by cutting the Hounds lead to 4-3.

And just like their opponent did, the Greyhounds struck on an early powerplay in the third as well.
A minute-and-a-half after the Generals goal, JOE CARROLL knocked the puck out of midair and home for his 18th goal of the season to retake a two goal cushion for the visitors.

With the Hounds on their second powerplay Kyle MacLean struck for a breakaway as a result of a Greyhounds’ turnover but BAILEY BRKIN stood tall down low.
No goal was call on the ice was made, but a review was conducted and the play deemed goaltender interference.
Further the Hounds netminder left the game with an unknown injury, and replaced by NICK MALIK.

MALIK would be met quickly with a shorthanded breakaway by Brett Neumann who would pull Oshawa back within a goal.
Neumann would connect again with just over a minute to play, to tie the game, and record the hat trick when he converted on a drop pass to send the game to overtime.

Skating in overtime for just the third time this season, the Greyhounds would get through the span thanks to a final minute toe save by MALIK, thus pressing the game to a shootout.

And after ZACK TROTT and BILLY CONSTANTINOU were both denied, the game could be ended by RORY KERINS.

Kerins skated in on Paputsakis and put a backhand shot upstairs for the game winner for the Greyhounds.

The win improved the Greyhounds to 25-27-2-0, good for 52 points.  It moves the club within a single point of Erie for the 8th and final playoff position in the Western Conference.
The Otters hold two games-in-hand on the Hounds.

UP NEXT;
The Southern Ontario weekend continues for the Greyhounds TOMORROW (Sat. Feb 15) when they make their only visit to the FirstOntario Centre in Hamilton against the Bulldogs.