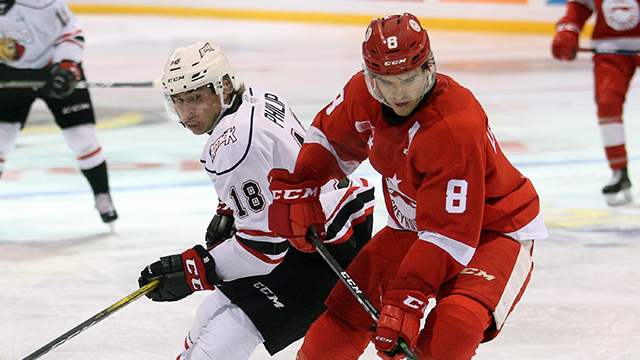 Meeting for the first time since their Game 5 series playoff finale last March, the Greyhounds and Attack took to the ice in Owen Sound on Saturday.
And while the second period on Friday was a catalyst to the Greyhounds victory, tonight it had the opposite result.

The two quick skating clubs put a scoreless first period in the books, but not without some solid chances at both ends.
Just five minutes into the game, MARC BOUDREAU did a great job to tie up Mathew Philip and negate his opportunity against the Attach overage forward.

Owen Sound would receive a powerplay of their own in the final minute of the first period, and 1:29 would carry over to the middle stanza.

Greyhounds outshot the Attack 14 to 5 in the first period and would start with 1:29 remaining on their penalty kill when the second period got underway.

The Hounds would get back to even strength but shot advantage would favor Owen Sound from start to finish of the period and they would open the scoring 3:30 into the period.\
Ethan Burroughs wristed one high past ETHAN TAYLOR to make it a 1-0 Attack lead.

An odd man situation by Owen Sound was finished off with Daylon Groulx notching his 5th goal of the season and a 2-0 deficit for the Hounds.

Then with under two minutes left a costly turnover deep in the Greyhounds’ zone saw Barrett Kirwin step out and place the puck blocker side for a 3-0 Attack lead through forty minutes.

Owen Sound outshot the Hounds 13 to 5 in the period.

An early third period powerplay would see the Greyhounds get on the board when JADEN PECA was there to swipe the puck across the line at 2:12.  The overager was following up after TYE KARTYE’s initial shot squeezed through Guzda.

That goal would be as close as the Hounds would get as Matthew Philip’s 4-on-4 goal regained the Attack’s three goal cushion and they fell by a score of 4 to 1.

The loss dropped the Greyhounds to 5-3-0-0 on the year, good for 10 points and 3rd in the OHL’s West Division.

UP NEXT;
The Greyhounds wrap up their three-game road trip this coming Thanksgiving Monday (Oct. 14) at the North Bay Memorial Gardens.
Game time against the Battalion is 2 PM.

Fans can catch all the action starting with the Soo Video TV Pre-Game Show on Rock 101 (101.3 FM, online) starting at 1:30 PM or watch Shaw Spotlight starting at 2 PM. 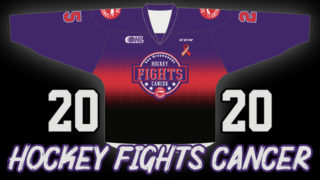