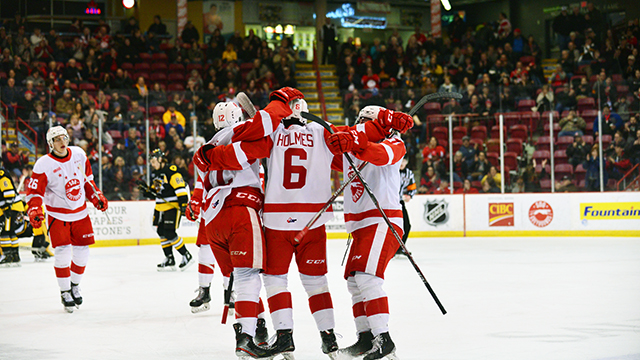 By his own admission, the start of the 2019-2020 season hasn’t been up to Jacob LeGuerrier’s standards.

“I tried to take on too much at once,” explained the fourth-year defenceman, who just recently began to play to his capabilities.

On Friday, the Montreal Canadiens prospect made a big contribution as the Soo Greyhounds began digging themselves out of an early-season hole.

LeGuerrier scored with 37.6 seconds left in regulation to give the Hounds a 4-3 victory over the Hamilton Bulldogs – and a two-game win streak – in front of 3,754 at GFL Memorial Gardens.

“It’s nice to get an important goal to win a game,” said LeGuerrier, whose shot from just inside the blue-line was deflected once – and maybe twice – before floating over Hamilton netminder Marco Constantini to break a 3-3 tie. “I was happy we scored, but I wasn’t sure it was me.”

Just as he released it, LeGuerrier’s shot hit a defenceman’s stick and went up into the air.

The 18-year-old (2000 birth year) spoke of how it may have also hit a second Bulldogs player en route to the net.

UP NEXT;
The Greyhounds wrap up their week, and the home stand on Saturday Night, November 16th when they host the Oshawa Generals.
Game time for the Generals only visit to the Soo this regular season is set for 7:07 PM.

Tickets are still available at the GFL Memorial Gardens Box Office, presented by SK Group, online at www.gflgardens.ca or by phone at 1.866.775.9422.