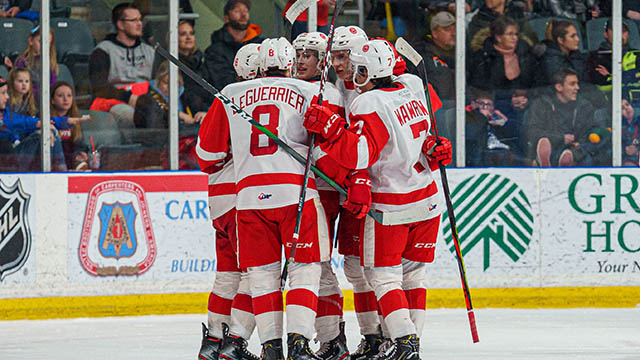 KINGSTON, ON-
Veteran defenceman JACOB LEGUERRIER got the ball rolling for the Greyhounds on Friday Night, and when all was said and done, his numbers did the talking as the Greyhounds remained perfect on their Eastern Ontario roadswing.

With a goal and assist, the Gloucester ON product also pitched in with a pair of shots on goal and a +4 rating in helping lead the Greyhounds to their 23rd win of the season in Kingston.

The Hounds and Frontenacs combined to go 0-for-3 on the powerplay, in the what would be a scoreless first period.

Before the game was a minute old the Greyhounds had their first powerplay of the game, while they would go to the man advantage for the second time before the midway point, to no avail.
Forced to kill off one shorthanded situation, the Hounds did so with ease.

One of the visitors bench chance of the game came about five minutes in when a three way passing play involving TANNER DICKINSON and JOE CARROLL, ended with the shot by COLE MACKAY.

JACOB LEGUERRIER rung a wrist shot off the left post after firing from the point to traffic.

Hounds held a slim shot advantage, 7-6, in the first period.

Scoring would open just past the midway point of the second period, with Kingston taking the 1-0 lead.
After the Hounds overskated the puck, and lost possession in neutral territory an odd man situation saw Zayde Wisdom set-up Ethan Ritchie for his 1st career OHL goal at 10:37.

Then at 17:50, TYE KARTYE sprung ZACK TROTT on a breakaway where he would beat the Frontenac netminder five-hold for the Hounds first lead of the night (2-1).

A late powerplay for the Soo would nearly expire, but twenty-two seconds would carry over to the third period of play before putting the teams back to five-on-five.

Just over a minute into the third period COLE MACKAY redirected the puck low past Dugas for what would later hold for the game-winning goal and a 3-1 Hounds lead.
The goal would be Cole’s 21st of the season, and his 41st point of the season.

Twenty-three for number twenty three, as RORY KERINS notched his 23rd goal of the season five minutes (5:01) into the period when a bounce happened to the side of the Kingston goal and he roofed it to extend the Greyhounds lead even further.

The Hounds completed their scoring in the game when JOE CARROLL‘s 8th goal in January, and 15th of the season, put the finishing touch on a five-goal performance by the Hounds.
On a play that was reviewed at length, Carroll knocked the puck out of mid-air before the period was ten minutes old.

Kingston would add a late power play goal (by Nick Wong) at 17:37 to cap off the evening.

With the victory the Greyhounds pulled their record to the .500 mark at 23-23-2-0, good for 48 points, and marked their third consecutive victory.
They now sit one point behind the 8th place Erie Otters and 2 points behind the 7th place Owen Sound Attack.

UP NEXT:
The five-day, three game roadtrip concludes for the Greyhounds this coming Sunday afternoon (February 2) with a visit to the Nation’s Capital against the 67’s.

Game time from TD Place in Ottawa is set for 2 PM.