RECAP; Kerins, MacKay, Caroll each score a pair in victory at Barrie 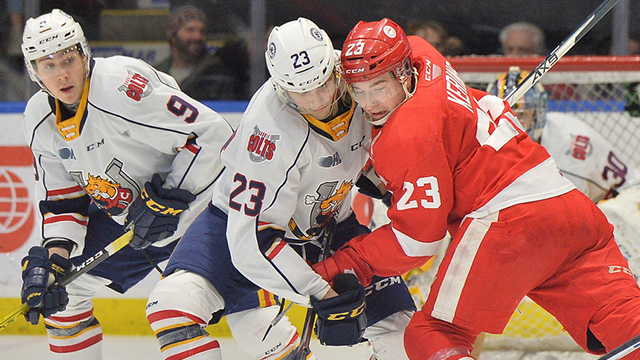 Story by soogreyhounds.com  |  Photo provided by the Barrie Colts

BARRIE, ON-
Officially hitting the midway point of the season, Game 34 Thursday night was met with a return to the win column for the Soo Greyhounds.

For the second time this year the Hounds would score eight goals or more, paced by two-goal efforts by a trio of players.

Timely goals would be key, as the Greyhounds held leads of 3-0 and 4-1 in the opening period before eventually taking a two-goal advantage into the dressing room after twenty minutes.

The Greyhounds scored a quick opening goal just 2:18 into the game when RORY KERINS was unphased with a man covering deep in Barrie territory, and send the puck out to JOE CARROLL who’s quick release beat Arturs Silovs for a 1-0 Greyhounds lead.

Shortly thereafter the Colts broke in on an odd-man rush that saw DREW WAWROW drop to the ice and perfectly break up the play that involved the Colts leading scorer Tyson Foerster.

After killing off a Colt powerplay, the Greyhounds extended their lead just eleven seconds later.
ZACK TROTT just got out of the box and led an odd-man rush before moving the pass to his left where RORY KERINS buried his second point of the night, and 16th goal of the season for a 2-0 Greyhounds lead.

The team’s penalty kill remained perfect thanks to erasing back-to-back Barrie powerplays, including 15 seconds of a 5-on-3, to get back to full strength.

Quickly after getting back to 5-on-5 play the Hounds would go on their first powerplay and would capitalize just 31 seconds in.
Patience was a virtue as the Hounds worked the puck to their preference before leading-scorer COLE MACKAY swiped the puck from the right of the goal, and low past Silovs for a 3-0 lead.

Barrie got on the board when they picked off a pass and Jason Willms skated in all alone before beating BAILEY BRKIN to cut the Hounds lead to a pair of goals.

Neither team produced many shots in the second period, but the Greyhounds made the most of the few they did have while scoring twice in the period.

It didn’t start that way for the visitors though, as they surrendered a shorthanded goal in the first half of the period.
The play saw Luke Bignell break around a Greyhounds defence on an odd-man rush and send it to the back door for a easy deposit for Tyler Foerster, and the Colts made it a one-goal hockey game.

And while timely goals were highlighted in the first, timely penalty killing stands out this period.
With the Hounds holding onto a one-goal advantage, a double minor penalty midway through the period provided Barrie a four minute powerplay.
The Hounds skated through it flawlessly, and kept the mold intact on this night, sitting 5-for-5 on the PK through two periods.

Eight seconds after getting back to even strength, RORY KERINS trailed TANNER DICKINSON over the Barrie line and put home a low shot to regain the Hounds a two goal cushion (5-3).

Then with 2:59 to go in the period ROBERT CALISTI placed a perfect pass creating a breakaway for CULLEN MCLEAN, who wouldn’t disappoint by putting a backhand five-hole home for a 6-3 score.
For McLean, the goal proved to be his first since a two-goal performance back on the opening night of the season.

Along with outshooting Barrie 21-7, the Hounds would outscore them 2-0 in the third period.

Twenty-eight seconds after killing off a Barrie man advantage COLE MACKAY buried the rebound from a RORY KERINS shot to put the seventh Hounds goal on the board.
Just over five minutes left in regulation the Hounds would add one more when JOE CARROLL fired a shot from the right point, on the powerplay, to round out the scoring while notching his 2nd of the game

The victory improved the Greyhounds back to the .500 mark with a record of 16-16-2-0, good for 34 points.  That moved them past the idle Erie Otters and into 8th in the Western Conference.  (Erie holds two-games-in-hand over the Hounds)

UP NEXT:
The first-half of the OHL season concludes for the Greyhounds TOMORROW NIGHT (Fri. Dec 20) when they visit the Kitchener Memorial Auditorium against the Rangers.  Game time is 7:30 PM.

Don’t miss out and get your pack  of the limited edition set today.