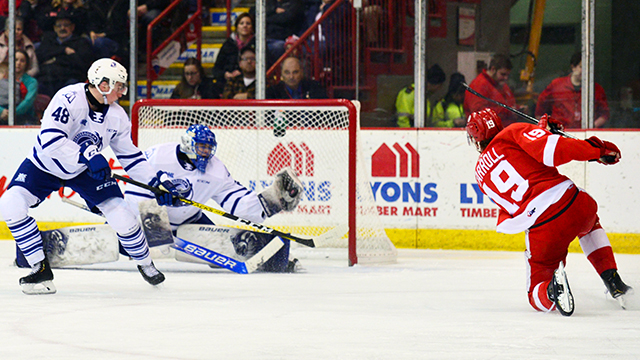 SAULT STE. MARIE-
Good things can happen when you get pucks to the net.

Alex Johnston subscribes to that adage.

“Oh yeah, I’ve always believed in that,” said the Soo Greyhounds centre, who notched the game winner on Friday in a come-from-behind 4-2 victory over the Mississauga Steelheads before 4,045 at GFL Memorial Gardens.

It didn’t appear to be a dangerous scoring chance, but Johnston simply got the puck to the net.

“I was just thinking that I wanted to throw it to his far pad,” the second-year player said of Steelheads netminder Kai Edmonds, who was strong throughout. “And it sneaked in.”

Asked if he was surprised his shot beat Edmonds low to the glove-hand side, Johnston said no.

UP NEXT;
The Greyhounds are back on home ice at the GFL Memorial Gardens this coming Sunday, January 12th when they host the London Knights for the second-and-final regular season trip to Sault Ste. Marie.
Game time is 2:07 PM.

Tickets are available at the GFL Memorial Gardens Box Office, presented by SK Group, Saturday 10 AM to 2 PM, Sunday 10 AM through game time or you can order conveniently online at www.gflgardens.ca or by phone at 1.866.775.9422.