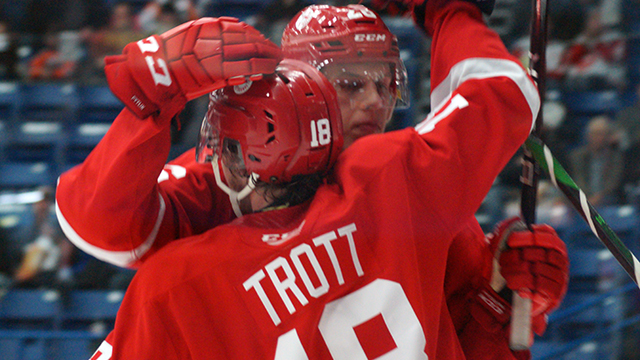 A pair of streaks came to an end on Wednesday night and for the Soo Greyhounds, it was an end to a long losing skid.

A four-gaol second period, triggered by an early shorthanded goal by Alex Johnston, helped the Greyhounds to a 6-2 Ontario Hockey League victory over the Sudbury Wolves at Sudbury Arena on Wednesday.

For the Greyhounds, the win snapped a seven-game losing streak while it also ended Sudbury’s four-game winning streak in the process.

“It always feels nice to get two points but more than anything, I’m really happy for the guys,” said Greyhounds coach John Dean. “It was tough to work as hard as they did over the last couple of weeks and not see the results.”

“We needed that one,” Johnston said.

GAME NOTES:
• OA Jaden Peca suited up in his 200th career regular season game on Wednesday.  The Woodbridge, ON product first suited up in the OHL on September 23, 2016 vs KGN.  Now in his 4th season, he hit the milestone.
• G Bailey Brkin made his Soo Greyhounds, and OHL debut and made 29 saves on 31 shots faced.;  The Sherwood Park, AB native was obtained by the Greyhounds on Tuesday Night from the Kingston Frontenacs.  To read that full release CLICK HERE.
• The Greyhounds entered the game winless in their last 7 games, while Sudbury had won 4-in-a-row
• Scratches were 14 McLean, 21 O’Rourke, 25 Mufarreh and 27 Hayton for the Greyhounds;  21 Hutcheson, 45 Larmand and 74 Biondi for Sudbury

UP NEXT;
The Greyhounds return to home ice at the GFL Memorial Gardens for a pair of games this weekend.
Both games will be against opponents who will be making their one-and-only regular season visit to the Soo.

Friday, November 15th it’s a battle of the dogs, against the Hamilton Bulldogs.

Then on Saturday, November 16th, the OHL-leading Oshawa Generals provide the opposition.

Game time for both contests is set for 7:07 PM.

Tickets are available at the GFL Memorial Gardens Box Office, presented by SK Group, online at www.gflgardens.ca or by phone at 1.866.775.9422.