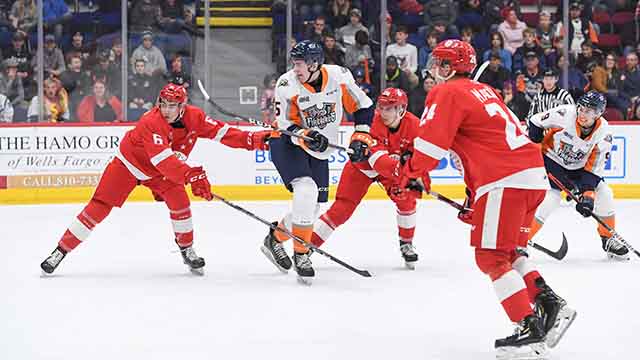 The Soo Greyhounds left the Dort Federal Event Center in Flint on Saturday night without two points, but the team will look back at the positives.

The team dropped a 4-1 Ontario Hockey League decision to the Flint Firebirds on Saturday but did so with an effort the club was mostly pleased with.

“I didn’t like our push back in the first half of the third period but if you take that away, I’m really happy with the way we competed,” said Greyhounds coach John Dean. “We had a lot of scoring chances but couldn’t find the back of the net. We get a really big game out of Christian Propp and we couldn’t find the back of the net. That’s what happens when you have a losing streak, you can’t seem to put it all together. The big thing is, for our young guys, I’m happy with the way they played.”

Dean credited the young group in taking a step forward but feels the need for more from the veteran players on the team.

UP NEXT;
The weekend caps off tomorrow night when the Greyhounds face-off against the Saginaw Spirit.
Game time from the Dow Event Center is set for 5:30 PM.

GAMES AT THE GARDENS
Next week two games are on deck for the Greyhounds at the GFL Memorial Gardens when a pair of team’s make their first trips of the season to the Lock City.

Then on Saturday, November 2nd it’ll be a West Division rematch with the Windsor Spitfires.

Tickets for these two games, and all regular season home games, are available by visiting the GFL Memorial Gardens Box Office, online at www.gflgardens.ca or by phone at 1.866.775.9422.