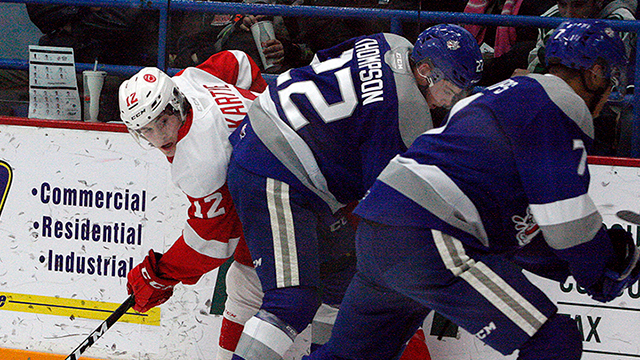 SUDBURY, ON-
Before tonight, the Greyhounds had won three consecutive games this season against Sudbury, while outscoring their Northern rivals 16-8 during that span.

And while the Hounds had produced offense against the Wolves, they had also limited their leading scorer Quinton Byfield in the two games he played in, to just a single point.

Tonight would be different.

Greyhounds’ netminder NICK MALIK was busy all period long facing double-digit shots and a flurry from Sudbury from the drop of the opening puck.
The opening sixty seconds ticked off the clock with Sudbury managing five shots on goal in that span and ending with an odd-man rush where Malik’s left leg robbed Quinton Byfield.

COLE MACKAY looked to respond for the Greyhounds shortly after when ALEX JOHNSTON sent him up the right wing to the net, but his attempt to tuck it past Mitchell Weeks was denied.
Six-and-a-half minutes in, ZACK TROTT was stopped twice on the backhand as well.

The quick paced period saw both goaltenders weather any early pressure and both teams skated through it penalty free, but not scoreless.

Quinton Byfield would give Sudbury a 1-0 lead at the 11:44 mark when he would rush up the right wing undetected and face Malik one-on-one before roofing the shot over the Greyhounds’ netminder for the goal.

Malik would be called to task in the final minute of the period as well, and the Hounds would escape with only a single goal deficit despite being outshot 15 to 7.

Early in the second period TANNER DICKINSON was sprung on a break, but with a Wolve bearing down quickly he was forced for a quick shot that was stopped to keep the one goal deficit.

Shortly thereafter, Sudbury had an odd-man rush that DREW WAWROW sprinted back to break up and avoid what would have been a strong chance against.

Sudbury’s lead doubled to 2-0 just past the midway point when a neutral zone turnover resulted in a play that saw David Levin set-up Quinton Byfield for his second of the night and 28th of the season at 10:19 mark.

Seconds after the two-goal deficit the Greyhounds were shorthanded and showed energy, and generated some of their best chances while being down a man.  First COLE MACKAY was turned aside, and then while TYE KARTYE and JAROMIR PYTLIK were on a 2-on-1 a broken stick foiled the duo any chance.
The Greyhounds skated through the two minutes span strong to get back on even terms.

But like it did earlier in the period, a turnover bit the Hounds, this time in the final minute of the period.
At 19:28 another turnover led to Sudbury skating in on a 2-on-1 where Levin and Byfield connected again for the hat trick goal and a 3-0 Wolves lead after forty minutes.

After Sudbury made it a 4-0 lead before the midway point of the third period, the Greyhounds would strike for a pair of goals.

Just past the midway point (10:31) MARC BOUDREAU put the Greyhounds on the board with his 4th goal of his rookie campaign.  After his first shot hit someone in front, it was there for a second opportunity that he made no mistake.

Then with just 2:28 to play in regulation, TYE KARTYE redirected a shot five-hole on Weeks for his 17th goal of the season and cut the deficit in half.

The Hounds would nearly skate the reminder of the game with pressure on Sudbury, and with an empty net at their end of the ice, before Brad Chenier raced to the puck and deposited it into an empty cage for Sudbury’s final goal of the game and a 5-2 final.

With the loss the Greyhounds losing streak extends to five games, while their record drops to 20-23-2-0, for 42 points.

UP NEXT;
The Greyhounds will now face a quick turnaround to cap off this Northern Ontario weekend when they face-off against the Battalion tomorrow afternoon (Sunday, January 26).
Game time is 1 PM from the North Bay Memorial Gardens.

After a couple days at home, the Greyhounds continue on opposition territory as they will be in Peterborough (Thursday), Kingston (Friday) and Ottawa (Sunday).