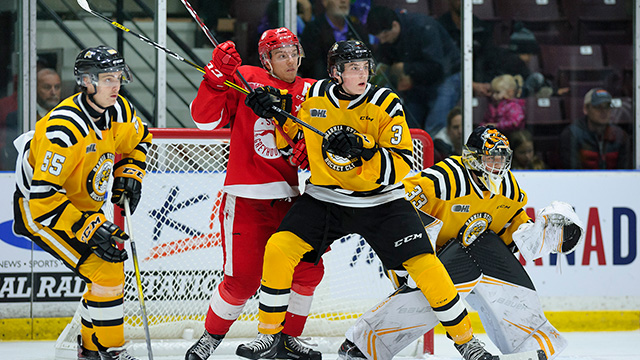 A splendid start on Sunday made for a well-deserved finish.

The Soo Greyhounds opened quickly, dominating the first period, en route to a 5-2 victory over the Sarnia Sting before 2,766 at Progressive Auto Sales Arena.

The impressive start – the Soo led 3-1 after 20 minutes – followed back-to-back, out-of-the-gate struggles by a team trying to fight its way out of an early season hole.

“We were really competitive on the puck and our O-zone play was the best it’s looked all year,” said head coach John Dean, whose team fell behind 4-0 in Windsor on Thursday, eventually losing 6-3, and 4-1 on Friday in Flint, eventually dropping a 4-3 decision.

“Our start was huge for us. It was everything,” added Hounds winger Cole MacKay, who scored twice, including an empty-netter, and contributed an assist for the winners. “We got pucks in deep, got to pucks quickly, we weren’t lazy in our D-zone and there was more jump to our game.”

On their off day Saturday, Hounds coaches and players met to discuss possible remedies to the club’s recent first period woes.

UP NEXT;
The Greyhounds return back to Sault Ste. Marie for a pair of contests this coming weekend.

Greats are available for both games by visiting the GFL Memorial Gardens Box Office, presented by SK Group, online at www.gflgardens.ca or by phone at 1.866.775.9422.