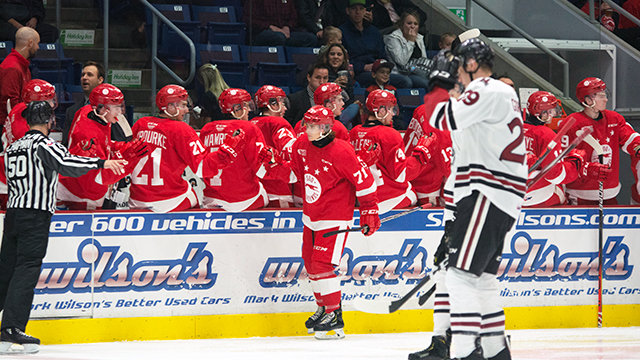 Story by soogreyhounds.com  |  Photo courtesy of the Guelph Storm

Heading into Friday night, the Guelph Storm had allowed the least goals against of all twenty-teams in the OHL.t
That all would change when the Greyhounds’ put up a season-high seven goals, kickstarted by a five-goal second period en-route to the victory.

The first period would start with neither team capitalizing on a pair of man advantages each, but timely goals would account for the scoring.
CHRISTIAN PROPP answered the call in a big way just six minutes in when a Greyhounds’ turnover ended up out front and on the stick of Eric Uba in the slot.

Just over a minute later the Hounds would open the scoring when MARC BOUDREAU would finish off a cross-crease feed from TYE KARTYE for the 1-0 Hounds lead.
CULLEN MCLEAN had the second assist, on what marked Boudreau’s 2nd career OHL tally after he scored the first goal of the season for the Hounds

Under two minutes left in the period, Guelph would then tie the game.
Sixteen seconds after killing off a Greyhounds man advantage, Cam Hillis side stepped a Soo defenceman and stuck with the play before putting his 2nd shot behind Propp to tie the game.

Hounds held a slight advantage on the shot clock, 11-10 through the opening twenty minutes.

A goal early in the second period regained the Greyhounds the lead, and began what was a five goal period for the team.
Just over a minute into the second TANNER DICKINSON finished off a play with COLE MACKAY and JAROMIR PYTLIK by going bar-down on the Guelph netminder for a 2-1 lead for the visitors.
It was Dickinson’s first-career OHL regular season goal.

The Hounds would then lose the services of JOE CARROLL just over five minutes into the period on what appeared to be a hit-from-behind in the corner to the side of the goal.
The third-year Hounds forward would head down the tunnel and not return to the contest.

Three goals in a span of 2:55 put then put the Hounds in a comfortable lead, heading into the midway point of the period.
JAROMIR PYTLIK put home a rebound from a DREW WAWROW shot at 7:29 to make it 3 to 1.

Less than a minute later, a Guelph turnover put the puck on JACOB LEGUERRIER’s stick between the circles and he t’eed up a shot for his 1st goal of the season, and a 4-1 Soo advantage.

Then at 10:24, RORY KERINS knocked down a JAROMIR PYTLIK feed and buried it to give thej Greyhounds the 5-1 lead just past the midway point of the period.

Just over two minutes left in the period, ZACK TROTT’s work down low led to his feed to JADEN PECA who went out to the slot to set-up RORY KERIN’s 2nd goal of the period and 6th of the season for a 6-1 lead after two periods.

Netminder CHRISTIAN PROPP denied a tip from in close with under three minutes to go, for one of his twelve saves in the period.

Guelph would start the third period by replacing starting netminder Owen Bennett with Tanner Wickware.  Bennett made 17 saves on 23 shots through forty minutes, while Wickware stopped 7-of-8 in the third period.

Less than a minute into the third ROBERT CALISTI and Eric Uba dropped the mitts, after the Storm forward appeared to take slash towards a Hound after the whistle.

The seventh and final goal of the game just past the midway point when COLE MACKAY beat Wickware five-hole for his 4th goal of the year.

The victory snapped the Hounds two-game losing skid, and improved their record to 5-2-0-0 on the season.

GAME NOTES;
• JAROMIR PYTLIK (1g, 3a), COLE MACKAY (1g, 2a) and RORY KERINS (2g) led the Hounds offense.
• Greyhounds’ scratches were 17 MATTHEW HALUSHAK (healthy), 27 BARRETT HAYTON (NHL-ARI) and 28 KALVYN WATSON (healthy).
• Nerminder CHRISTIAN PROPP made his 5th start of the season for the Hounds and stopped 28 of 29 shots he faced.

UP NEXT;
The Greyhounds head northwest for their one-and-only trip to the JD McArthur Arena in Owen Sound.
Game time against the Attack is set for 7:30 PM.

Fans can catch all the action starting with the Soo Video TV Pre-Game Show on Rock 101 (101.3 FM, online) starting at 7 PM or you can watch on Shaw Spotlight starting at 7:30 PM.

UPCOMING HOME GAMES;
Following this three-game road trip, the Greyhounds will return back to the GFL Memorial Gardens for a trio of games next week.

Action kicks off on Wednesday, October 16 when they host division rivals, Saginaw Spirit at 7:07 PM.
Saturday Night, October 19, the Barrie Colts make their lone visit to the Soo at 7:07 PM as well.
While less than twenty-four hours later, Sunday, October 20 it’ll be the final regular season visit by the North Bay Battalion.  Game time is 2:07 PM.

Tickets for these three games, and all regular season home games, are available by visiting the GFL Memorial Gardens Box Office (Monday to Friday 10 AM to 5 PM, Saturday 10 AM to 2 PM), online at www.gflgardens.ca or by phone at 1.866.775.9422.