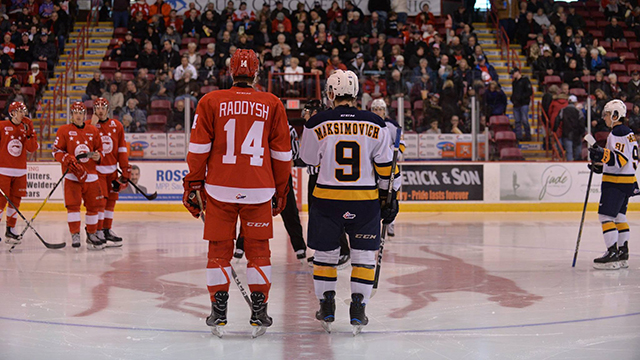 After being held to a season-low twenty three shots on Friday Night, the Soo Greyhounds set a good tone early on Sunday and would eventually skate to their 22nd consecutive home ice victory, edging Erie by a score of 3 to 2.

Along with outshooting Erie 14-7 in the first period, the Greyhounds opened the scoring with a goal in the dying seconds of the period.
With just over five seconds left to play in the period, BARRETT HAYTON won the draw in the Otters zone and set-up JACK KOPACKA who buried his 22nd goal of the season for a 1-0 lead through twenty minutes.

The two teams traded off single powerplay chances in a scoreless second period.  It was a period that Bannister felt his club played “in the perimeter a lot.”

Move forward to the third and just over five minutes in, TAYLOR RADDYSH would increase the Hounds lead when BORIS KATCHOUK moved the puck back to the Caledon, ON native would fire high glove side on Daniel Murphy to increase the lead to 2-0.
It was Raddysh’s 24th goal of the season, and 9th in eleven games with the Hounds.

Before the period was midway through the visitors would cut the lead in half when Chad Yetman put the puck on net from the right wing boards before Emmett Sproule knocked home his second chance to make it a 2-1 game.

TAYLOR RADDYSH would score another insurance marker, and his second goal of the period and game, very similar to the first – going upstairs on Murphy at 15:52 for the 3-1 lead.
BORIS KATCHOUK and MORGAN FROST had the assists.

Erie would go on a late powerplay with 2:34 remaining, and after calling a timeout pulled their goalie for a 6-on-4 advantage.

The Hounds weathered the PK turning the game into a 6-on-5 but with seconds remaining on the clock former Greyhound Hayden Fowler drove to the slot and fired home Stephane Patry’s feed in the 3-2 final.

“We are a little bit stale right now as a hockey club.  We’re certainly not playing our best.  I would be worried if we were playing real well and getting results like this.  We are playing well enough to win right now, but we aren’t as well as we should be.  We are still managing to win hockey games and the next two weeks will be difficult for us and we need to be better than we have in the past two weeks” commented Bannister when asked if his team was playing it’s best, or at it’s peak.

The Head Coach also referenced the impact it has on the Hounds missing both CONOR TIMMINS and RASMUS SANDIN from the blue line.

“No, but we are still six weeks before we hit playoffs.  We have a lot of time.  I shouldn’t say we aren’t where we’d like to be at this point but we are minus two real good players that defend well, move pucks and run our powerplay.  That’s a big part of the hockey game this year” he said when asked if the club is playing as well as it should be.

“I’ve said it before this year, anyone take their best two defenceman off their team, or anyone, and see where they are.”

UP NEXT;
The Greyhounds now head out on their longest roadtrip of the season that will take them to stops in St. Catharine’s, Erie and Hamilton.

Action kicks off this Thursday, February 8th with a visit to the Meridian Centre against the IceDogs.
Game time is 7 PM.