RECAP; Greyhounds take the positives while coach takes the heat 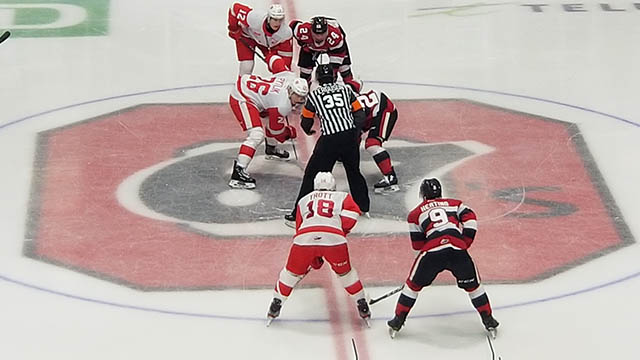 OTTAWA, ON-
Facing one of the top teams in the Canadian Hockey League, there was a lot to like for the Soo Greyhounds on Sunday afternoon.

With the 67’s leading 2-1 midway through the third period, rookie defenceman Jacob Holmes was nabbed for a tripping minor in the defensive zone by the neutral zone referee. Dean argued the call and ultimately received a bench minor on the play as well, putting the Greyhounds down two men for the second time in the contest.

Overage defenceman Noel Hoefenmayer scored on the 5-on-3 to put Ottawa ahead 3-1 with 8:42 to go in the game.

“As far as I’m concerned, I cost our team the game,” Dean said. “I don’t think I deserved the minor but, I should know better than to say a word to (the referees).”

UP NEXT;
A four-game home stand is up next for the Greyhounds, with three games this coming week.

Action kicks off this Wednesday, February 5th against the Kitchener Rangers (7:07 PM) before moving on to back-to-back weekend contests.
Friday Night (Feb. 7) the Guelph Storm are in the Soo @ 7:07 PM, while on Saturday (Feb. 8) the Niagara IceDogs make their one-and-only visit.

Tickets for all home games can be purchased at the GFL Memorial Gardens Box Office, presented by SK Group, online at www.gflgardens.ca or by phone at 1.866.775.9422.