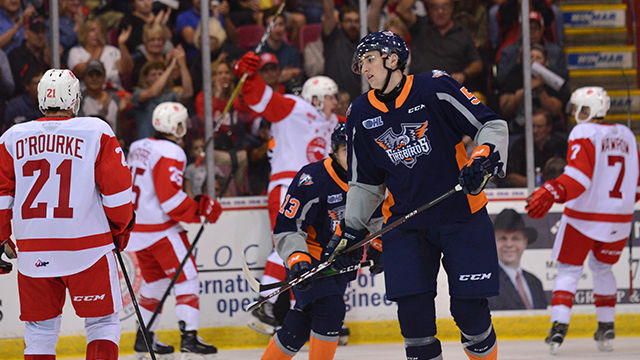 For the opening game of the season, the start was about as good as they could have hoped for.

A pair of goals in the opening period and a 16-5 shot advantage helped the Soo Greyhounds to a 6-3 Ontario Hockey League win over the Flint Firebirds at the GFL Memorial Gardens on Friday night.

Ahead of the game, Greyhounds coach John Dean spoke of the need to make sure the compete level was high for the opener and that’s exactly what he got out of the players.

“I’m happy with the compete level of the group,” Dean said. “The fans really got the young guys going. It was a textbook first period in a home opener. It was a nice crowd. For me, it was exciting on the bench to watch the kids play like that and feed off the energy of the building.”

For Dean, there was a lot to like in the opening period as a whole.

“(In the first period) we really tried to make plays without being careless,” Dean said. “We were relentless in the offensive zone in reloading and attacking when we didn’t have the puck and fighting to get it back. That’s the sign of them understanding what it takes to play a complete game.”

“We expected that,” Wellwood said. “It’s their home opener. They’re going to have a lot of energy. They’ve got jump. The effort was there, we just didn’t execute.”

UP NEXT;
The Greyhounds return to action less than twenty-four hours later – Saturday, September 21st when they host the North Bay Battalion.
Game time at the GFL Memorial Gardens is set for 7:07 PM.

Great seats are still available at the GFL Memorial Gardens Box Office, presented by SK Group, online at www.gflgardens.ca or by phone at 1.866.775.9422.