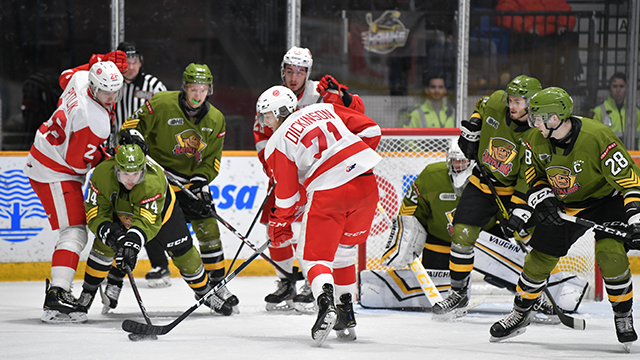 NORTH BAY, ON-
In the end, it’s something to build on.

It wasn’t perfect, but the Soo Greyhounds losing skid came to an end on Sunday afternoon with a 6-4 Ontario Hockey League win over the North Bay Battalion at the North Bay Memorial Gardens.

After struggling out of the gate on Saturday night in Sudbury, the Greyhounds took a 2-0 lead in the opening period against North Bay, outshooting the Battalion 18-4 in the frame as well.

“It was a very good start,” said Greyhounds coach John Dean. “We’re really happy with the way we came out. It made it pretty that the guys looked like they were on a mission. It was one of our best periods in a long time and it reflected on the scoreboard.”

North Bay cut into the lead with just over seven minutes to go in the second period before tying the game in the opening minute of the third.

Just 22 seconds after North Bay tied the game at two, Tye Kartye would give the Greyhounds the lead for good and Jaromir Pytlik would extend the lead 1:06 after Kartye broke the tie.

UP NEXT;
The Greyhounds return back to Sault Ste. Marie for a couple days before they head back out on the road for one of their longest trips of the season.
Next week will take them through Eastern Ontario with stops in Peterborough, Kingston and Ottawa.