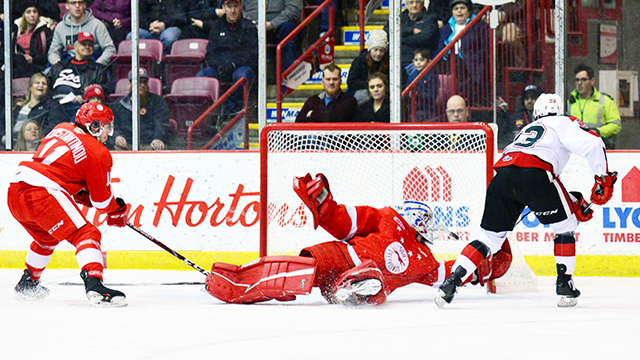 SAULT STE. MARIE, ON-
It wasn’t the victory they craved.

Still, the Soo Greyhounds turned a strong performance into a single point against the Canadian Hockey League’s top-ranked team on Friday.

Joseph Garreffa notched his third goal of the game at 1:30 of overtime, giving the Ottawa 67s a 5-4 victory over the Hounds before 3,916 at GFL Memorial Gardens.

“This is the best team in the country and for us to fight back like that, the resilience of this group was pretty impressive,” said Hounds head coach John Dean, whose team rallied from four, one-goal deficits to gain a point on both the Erie Otters and Owen Sound Attack in the battle for an Ontario Hockey League playoff berth.

Erie has two games in hand on the Hounds, while the Attack has played three fewer times.

“Considering our situation, and the time of the year, we wanted two (points),” said Dean, whose club has 11 regular season games remaining, including a Sunday (2:07 p.m.) home clash with Sarnia. “But we’re going to walk out of here with a positive.

UP NEXT;
The Greyhounds wrap up the weekend, and this home stand this coming Sunday, February 23rd when they host the Sarnia Sting.
Game time from the GFL Memorial Gardens is set for 2:07 PM.

Fans are reminded that prior to the game, the Sault Ste. Marie Hockey Hall of Fame Committee will induct this year’s members;
Rico Fata, Chris Felix, Jeremy Stevenson, Lorie Springall and Sharon Buehner.
The ceremony will take place before the game.

Great seats are still available by visiting the GFL Memorial Gardens Box Office, presented by SK Group, online at www.gflgardens.ca or by phone at 1.866.775.9422.