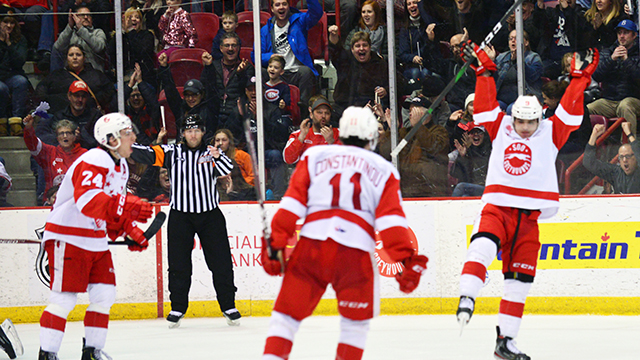 SAULT STE. MARIE-
Early in the season, a 3-0 deficit might have been too much to overcome for the Soo Greyhounds.

It wasn’t on Saturday night.

After falling behind by three on Saturday night, the Greyhounds proceeded to score four unanswered goals to beat the Sudbury Wolves 4-3 in Ontario Hockey League action at the GFL Memorial Gardens.

“We don’t want to be putting ourselves in this position on a consistent basis but I’m happy with the way our guys continually respond,” Greyhounds coach John Dean said.

Sudbury took the lead in the opening period thanks to a goal by Blake Murray just under eight minutes into the contest.

Goals by Owen Robinson and Isaak Phillips 41 seconds apart later in the frame gave the Wolves a three-goal lead and chased Greyhounds netminder Bailey Brkin from the game after stopping 10 of 13 Wolves shots to that point.

Enter Ethan Taylor, who last played on Nov. 21 in Windsor.

“It’s pretty clear Ethan Taylor told me where to go tonight,” Dean said jokingly. “I give him credit. That’s the response we want. This guy has had a tough go here over the last little while. For him to go in cold like that and pitch a shutout, and with the chances we gave up over the course of the night were substantial, it’s not like we gave him a tight-checking game.”

UP NEXT;
The Greyhounds conclude 2019 with a road game when they make the trek down Interstate 75 to face-off against the Saginaw Spirit this coming Monday, December 30th.

Game time from the Dow Event Center is set for 7:05 PM.

Fans can catch all the action by tuning into the Soo Video TV Pre-Game Show on Rock 101 (101.3 FM, online here) starting at 6:35 PM.
** This game IS NOT televised **
Additionally, fans can take advantage of the OHL’s ‘Holiday Special’ and watch the game FREE on OHLLive by using the promo code ‘ohlgift19’.