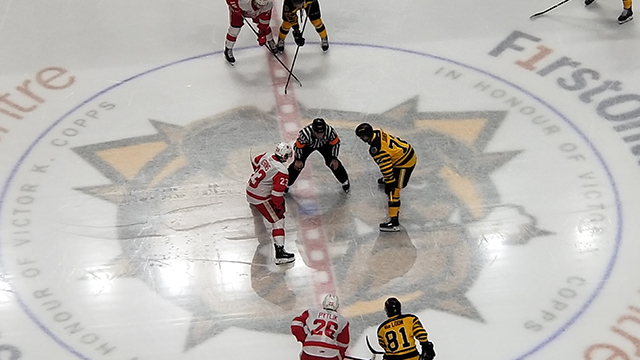 HAMILTON, ON-
On a day when miscues were again a problem, the head coach of the Soo Greyhounds used one word in particular to describe his club’s performance.

“We looked flat,” said John Dean, shortly after a disappointing 5-2 loss to the Hamilton Steelheads before 3,846 at FirstOntario Centre. “It was a difficult one for sure.”

“We were too passive, the whole team,” added defenceman Jacob LeGuerrier, whose club fell to 25-28-2-0 heading into a Monday game in Guelph (2 p.m.) “We gave up too many odd-man rushes and that resulted in goals for them.”

The loss cut especially deep with Erie coming from behind to beat Oshawa 6-5 in a shootout. The Otters (22-20-4-7) lead the Hounds by five points in the race for the eighth-and-final playoff spot in the Western Conference.

Jan Mysak scored three times and set up another for the Steelheads, who connected three times in a span of 5:30 in the first period to erase a 1-0 Soo lead.

Cullen McLean had given the visitors a 1-0 advantage when he beat Hamilton goalie Zachary Roy with a backhander high to the glove-hand side just 2:46 in.

UP NEXT;
After an off day on Sunday, the Greyhounds wrap up their road trip on ‘Family Day’ Monday (Feb. 17) in Guelph.
Game time against the Storm is set for 2 PM