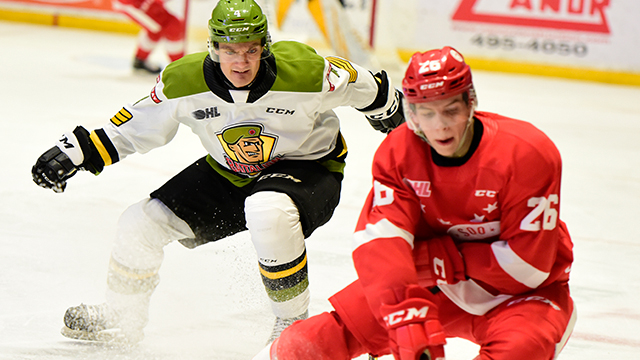 Coaches at all levels of hockey talk about how special teams can be the difference in a game.

The Soo Greyhounds witnessed that first-hand on Monday afternoon against the North Bay Battalion.

“Obviously five power play goals against is unacceptable,” said Greyhounds coach John Dean. “We need guys to step up. We need guys to block shots, we need guys to make saves and tonight it didn’t happen on the penalty kill.”

“Special teams are where games are won and lost and tonight wasn’t our night on the penalty kill,” added Greyhounds forward Jaden Peca. “We want to be better (on the penalty kill) and capitalize on the power play.”

The five power play goals were a new team record for the Battalion, who use five forwards on their top power play unit.

GAME NOTES:
• D Matthew Halushak (9th Rd, 2018) made his OHL regular season debut.  He was one of seven defenceman in the Greyhounds’ in the line-up along with 11 forwards.
• F Joe Carroll missed his second straight game with an upper body injury.

UP NEXT;
The Greyhounds will return back to the GFL Memorial Gardens for a trio of games next week.

Action kicks off on Wednesday, October 16 when they host division rivals, Saginaw Spirit at 7:07 PM.
Saturday Night, October 19, the Barrie Colts make their lone visit to the Soo at 7:07 PM as well.
While less than twenty-four hours later, Sunday, October 20 it’ll be the final regular season visit by the North Bay Battalion.  Game time is 2:07 PM.

Tickets for these three games, and all regular season home games, are available by visiting the GFL Memorial Gardens Box Office (Monday to Friday 10 AM to 5 PM, Saturday 10 AM to 2 PM), online at www.gflgardens.ca or by phone at 1.866.775.9422.