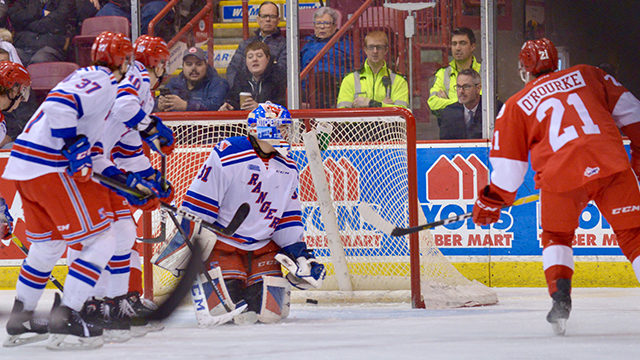 They’ve stressed how important starting well is and for the Soo Greyhounds, a slow start on Sunday made life very difficult.

The Greyhounds fell behind 2-1 and were outshot 15-3 through one period against the Kitchener Rangers and, despite battling back and taking a lead, dropped a 4-3 overtime decision at the GFL Memorial Gardens.

Jonathan Yantsis found himself in the slot and beat Greyhounds goaltender Matthew Villalta in close 1:29 into overtime to give the Rangers the victory.

It was a game that the Greyhounds saw some positives, but the slow start proved costly.

“We looked pretty flat,” said Greyhounds Coach John Dean of the start to the game. “We pre-scouted them as having a really hard forecheck and they’re really aggressive. Still, we got caught off guard a little bit.

“Kitchener is a well-coached team and they came at us very hard,” Dean added.

Dean added that a tough start to the game “reinforces our point” of how important starting well is.

For the Rangers, the strong start was a key against the Greyhounds.

“I liked the fact that we came out hard,” said Kitchener Coach Jay McKee. “It’s not easy when a team plays the night before and then has a two o’clock game. I’m proud of our guys for taking advantage of that and coming out hard and trying to put them on their heels early.”