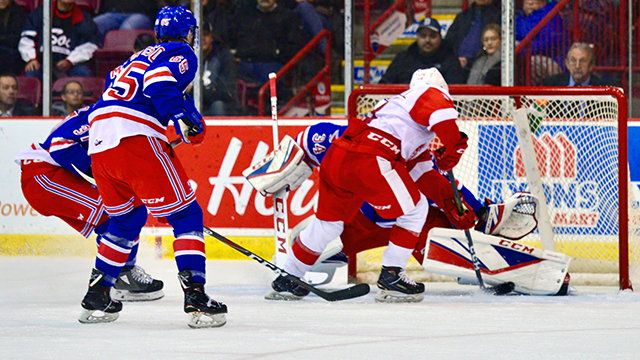 KITCHENER, ON-
For the second time in as many games against the Greyhounds, the Kitchener Rangers would erase a third period deficit en-route to a victory.

This time around the Hounds were coming in on a perfect week (wins vs SAR and @WSR) thus far, while the Rangers were reeling from a lopsided loss (2-10 @NIA) the night before.

Two of the top specialty team departments would go head-to-head early on when a Kitchener  powerplay less than a minute in was compounded into a 5-on-3 for forty seconds.
When all was said and done the Greyhounds returned to even strength unscathed.

And after allowing just two shots against by the midway point, it would be the Rangers 3rd and 4th directed on MATTHEW VILLALTA that would result in the game opening goal.
Reid Valade’s initial shot produced a rebound that Joseph Garreffa grabbed and moved past an outreached left arm of the Hounds netminder and put it over the line for a 1-0 lead.

The Greyhounds had their only powerplay go for not, before Kitchener converted on their third try of the game to increase their lead.
At 17:20, Greg Meireles move up the right wing got a Hounds defence coming at him and moved around before firing high gloveside for a 2-0 Rangers lead after twenty minutes.

Come the middle frame it would be the Greyhounds accounting for all the scoring to put themselves on even terms.

Just 2:08 into the second period RYAN ROTH got the rebound off a solid shot from JOE CARROLL, and the Ladue, MO product notched his 20th of the year to put the Greyhounds on the board trailing 2-0.

It would become a 2-2 game at the 11:41 mark when a feed by MORGAN FROST from behind the goal line was one-timed home by KEEGHAN HOWDESHELL for his 39th of the season, and a tied contest.

The game stayed that way because of the biggest save of the contest, when MATTHEW VILLALTA robbed Rangers’ captain Rickard Hugg with 3:45 to go in the period keeping things all even.

A quick goal just nineteen seconds into the third period would give the Greyhounds their first lead of the night.
MAC HOLLOWELL’s cross-corner dump was scooped up by MORGAN FROST who circled the net of Richardson and send a feed out front to JAROMIR PYTLIK who deposited his 7th goal of the season for a 3-2 lead.

The Greyhounds worked through a Ranger powerplay shortly after before seeing Kitchener net two goals in a span of 2:24 to retake the lead.
Jonathan Yantsis at 7:05 and then Rickard Hugg at 9:29, while the team’s skated 4-on-4 rounded out what would be the nights scoring.

Four of the last six minutes and forty-eight seconds would be spent killing off further Ranger powerplays as the Greyhounds could not regain even terms and managed just two shots in the final period in the 4-3 setback.

With the loss the Greyhounds record sits 38-13-6-1, good for 83 points.
The team now trails London by four points for the Western Conference lead, and remain four points ahead of Saginaw for the division lead.
Saginaw now holds a game in hand on the Hounds and they will play that tomorrow night in Hamilton.

GAME NOTES;
• Friday Night marked the 250th career regular season game played for Hounds leading-scorer MORGAN FROST.  The Aurora, ON native who was originally selected in the 4th Round of the 2015 OHL Priority Selection, appeared in his 1st game on September 25 (vs WSR) of that same year.
In his 4th season with the Greyhounds he also recorded his 300th career regular season point now giving him 105 goals, 196 assists, good for 301 points in 250 games played.
• Greyhounds scratches were 13 Pucek, 22 Calisti, 27 Hayton, 33 Taylor and 39 Jacklin.  G Mario Peccia was recalled from the Toronto Lakeshore Patriots and served as Villalta’s back-up.
• Ranger scratches were 15 Tresoor, 19 Serpa 20 Langdon and 89 Guest.

UP NEXT;
The weekend wraps up this SUNDAY AFTERNOON (Feb. 24), with the Greyhounds visiting the Progressive Auto Sales Arena in Sarnia against the Sting.
Game time is 2:05 PM.