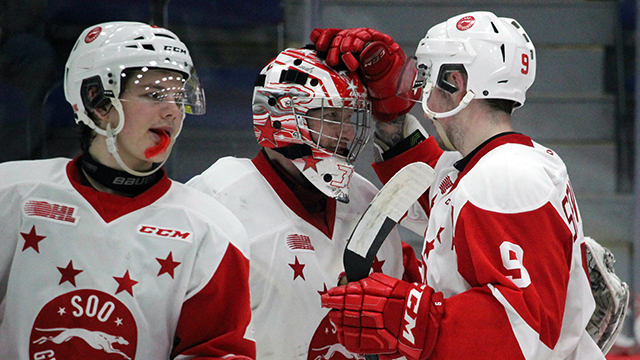 FLINT, MI-
It was a sluggish start for the Greyhounds on Monday, as the series with Flint shifted to the state of Michigan on Monday.

Along with taxing their players with ten minutes of penalties, the Hounds surrendered the only goal of the period to trail Game 3 against Flint.

“A lot of them.  It’s tough on your goaltending, it’s tough on your penalty kill and you have a bunch of guys that you want on the ice just sitting on the bench and it’s tough to get them off.  Certainly it’s frustrating” started Head Coach Drew Bannister when asked how frustrating the penalties against his club were.

“The beginning of the first and second you’re killing a penalty and you’re just hold on there.  Spent a lot of time in your dzone and it tires guys out” he added.

Just nine seconds into the first period a turnover in the Greyhounds ended up on the stick of Kole Sherwood as he would test, and be turned away, by JOSEPH RAAYMAKERS with one of his fourteen saves in the period.

Sherwood would later put Flint on the board before the period was ten minutes old (8:12) when a Greyhounds pass would hit off his skates and he would skate up the left wing and and fire a shot that entered past the glove side of RAAYMAKERS and came back out as quick.
The play would be reviewed by stood as a good goal, and Flint led 1-0.

Over the final ten minutes it was a parade to the penalty box as Flint had a total of five powerplays overall in the first, the Greyhounds three.

Flint outshot the Hounds 15-6 in the opening twenty minutes.

Forty-two seconds into the second period the Hounds penalty kill would go back to work as the club was tagged with a minor penalty.
While on that shorthanded situation HAYDEN VERBEEK would outrace Flint to the corner of the Firebirds zone and change directions opening himself up for a feed to the slot where TIM GETTINGER pulled the Hounds even with his 1st goal of the playoff and we were tied 1-1. 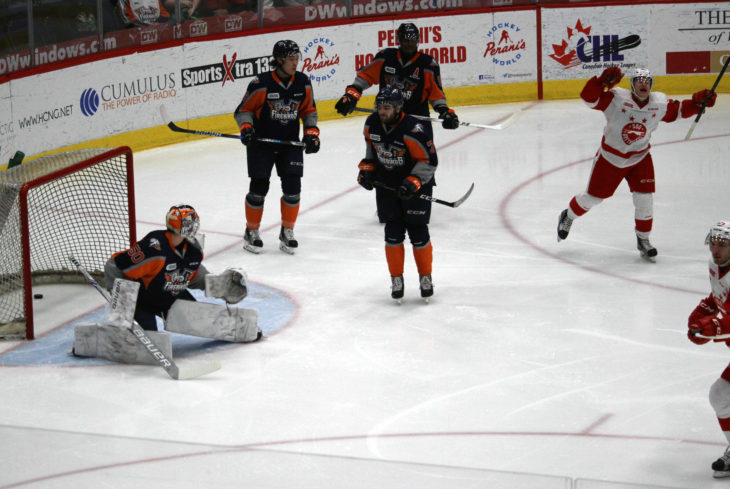 And while being outshot 8-3 over the course of the first ten minutes of the period, the Hounds matched Flint in that department and picked up momentum as the period went along as the two teams headed into the dressing room after forty minutes all tied up (1-1).

The offensive trio of BORIS KATCHOUK, BLAKE SPEERS and BOBBY MACINTYRE gave the Greyhounds jump from the opening face-off of the third period and it was something the team definitely build off off.

While Flint was tagged with back-to-back icings early, the Greyhounds outshot Flint and took territorial advantage of their opponent and it would eventually pay off.

On their fourth powerplay of the game just past the midway point of the third, the Hounds would take their first lead of the night.
Keeping the puck in at the Flint blueline, CONOR TIMMINS would get a second look at the puck and put a wrister to the goal that was redirected past Connor Hicks by ZACH SENYSHYN for his 2nd goal of the playoffs and the Greyhounds first lead of the game, 2-1.
MORGAN FROST had the lone assist. 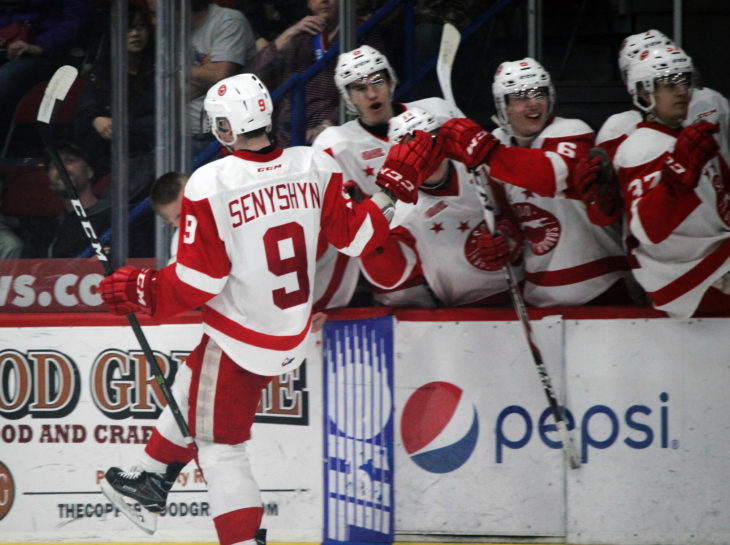 The Hounds 8th and final penalty kill would come in the final three minutes and within seconds of going 5-on-5, BORIS KATCHOUK skated the puck from neutral territory into the zone and fired home the insurance marker into an empty net for the 3-1 victory.

“I thought we came out and were strong.  We got guys into it in the third” started Bannister when asked how his team responded with the “money on the line”.

“Obviously the penalties in the first and second took a lot of flow out of the game for us and kind of gave them momentum and was making harder for us to get in the game.  In the third we did a good job of controlling the play and our emotions.  We were able to get guys into the game and we did a lot better job spending more time in the offensive zone and playing little bit faster in the neutral zone rather than slowing it down which made it a little bit more difficult on them” he added.

The Greyhounds went an impressive 8-for-8 on the night while netminder JOSEPH RAAYMAKERS made 33 saves on 34 shots, including 29 on 30 through the first two periods.

“I thought Joseph was excellent especially in the first obviously with all the powerplays.  He had to make some saves.  Overall I thought he played very well for us” concluded Bannister.

It marked RAAYMAKERS 1st career post-season victory, in his first start for the third year netminder.

The win provided the Hounds a 2-games-to-1 advantage in the best-of-seven series with Flint. 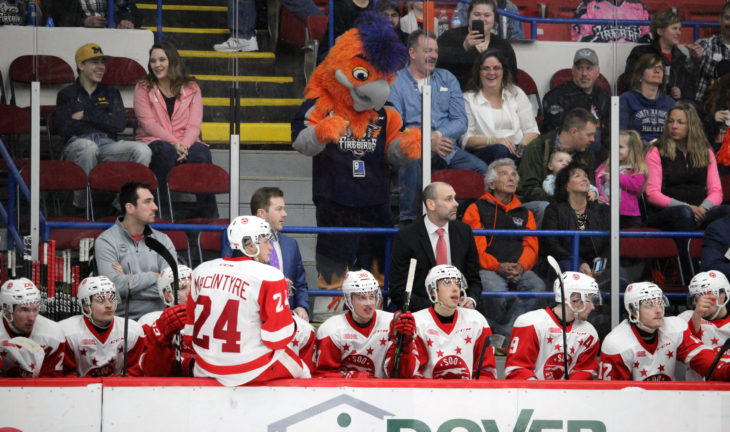 UP NEXT;
Game 4 of this series is set for this coming Wednesday, March 29th again inside the Dort Federal Event Centre.
(Greyhounds leads best-of-seven series 2-1)