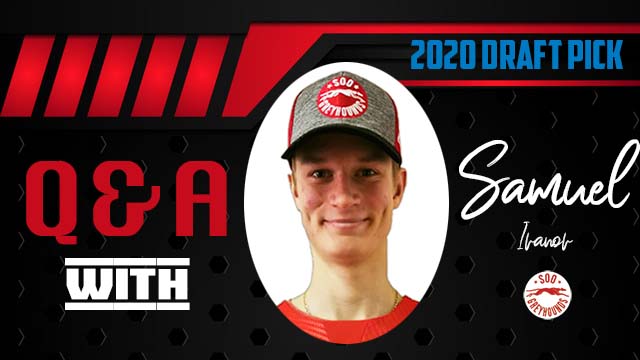 Today we  introduce you to a sixth member of this year’s draft class through a ‘Q&A’ feature exclusively here on soogreyhounds.com.

Today we meet Greyhounds 1st Round selection (4th) overall of the U18 Priority Selection … Samuel Ivanov.

Most memorable moment:
When I was young I played for a weak team. One game, we played a top team and I helped my team win 1-0 with a 48 save shutout. At that moment, my parents knew that I was a special player because I never gave up in that game.

What challenges did you overcome to get where you are now in hockey?
My parents are immigrants and competitive hockey was new to them. I started playing from the bottom levels and made my way all the way up. I don’t see it as a challenge, but as a strength that has motivated me throughout my playing career because I know what it took to get from one level to the next and many goalies that started at the AAA level, have never experienced that.

What do you know about the Soo Greyhounds or the City of Sault Ste Marie?
I know that it is a beautiful, small town. My parents have actually wished to travel to Sault Ste Marie in the past to take a ride in the famous Agawa Canyon train and visit the beautiful views. Coincidentally, I was drafted to the Soo which I am very proud of, and now my family and I will have a chance to adventure in the beautiful city of Sault Ste Marie! I also enjoy fishing with my dad and brother, and I am very excited to go fishing for some Walleye!

Words of advice for a player aspiring to be drafted/play in the OHL?
The best advice that I never got, but wish for every young player and goalie is to blockout the unnecessary noise. In my minor midget year, I was too focused on what do scouts think of me? Will I be drafted? Is anyone watching? These things made my season harder on me than it should have been. I went back to AAA for my midget year, and didn’t even think for a second about what scout is watching or about the draft. I set a goal before the season, that I was going to be drafted 1st overall. It seemed far fetched, but I kept to my work ethic and did my best every game. Come draft day, I was begging to go fourth overall to the Soo Greyhounds because there is no other OHL organization that I felt a connection to other than the Soo!

Sport other than hockey:
Basketball

Hobby/Hobbies:
Taking care of my cat

Food:
My mom cooks a lot of great food that is healthy and tasty! I love it!

OTHER
Do you speak any other languages?
Russian, French

Who has been the most influential person in your life?
My mom is the best person in the world, she has been through everything with me. Hockey wise, if it weren’t for my amazing dad and his love for sports, I wouldn’t be playing hockey at all.

If you could hang out with one celebrity (dead or alive) who would it be?
Vladislav Tretiak (He is a soviet union goalie who invented the butterfly and I would love to pick his brains about hockey!)

What did you want to be when you were small?
I used to jump around in a Spider-Man costume, so probably Spider-Man himself!

If you could live anywhere, where would it be?
I would love to have a home in Irkutsk, Russia. My mom was born there and I would love to learn more about life in Russia.

Any hidden talents or something people don’t typically know about you?
When at home, I always have an urge to make things proper. Sometimes when walking by a room, I just get an itch to straighten out a box that’s sideways while others are straight.

What was the best vacation you ever took and why?
The first time I ever went on vacation was about three years ago, I went to Cuba and it was very special because my family and I had never been in a tropical country before. It was very nice and relaxing!

What could you not live without?
My family. I would be fine living away from my family knowing that they’re all doing well. But, things happen and I always want to help my family first before anyone else.

You were stuck on a deserted island, what three (3) things would you bring with you?
Food and water, Soccer Ball, Fire Starter Kit