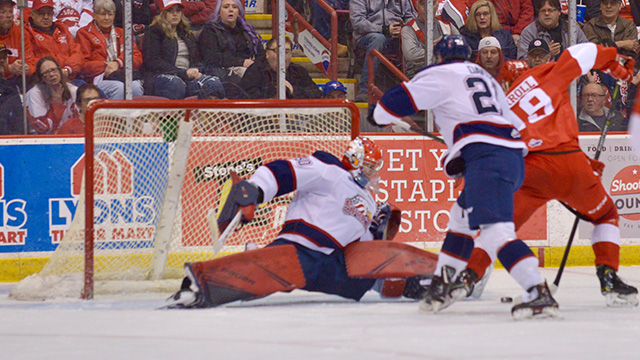 A late power play goal proved to be the difference and it put the Soo Greyhounds in a deep hole.

A too many men penalty in the third period led to the game-winning goal for the Saginaw Spirit in a 7-5 Ontario Hockey League playoff win over the Greyhounds at the GFL Memorial Gardens on Tuesday night.

In the process, the win gives the Spirit a commanding 3-0 lead in their Western Conference semifinal series with a chance to advance on Thursday night.

Following an injury to forward Morgan Frost earlier in the period, the Greyhounds were forced to shuffle their lines and the changes meant a winger changing sides. That led to a pair of players jumping onto the ice on a line change and the Greyhounds getting hit with the bench minor.

Saginaw rookie Cole Perfetti proceeded to get the puck in the left faceoff circle and beat Matthew Villalta to give Saginaw a 6-5 lead at the time en route to the win.

The Greyhounds jumped out to a 3-0 lead early, which included a pair of goals in the opening 2:15 of the game and led 3-0 before the game was 10 minutes old.

“We came out hungry and that’s the way we have to play when our backs are against the wall,” Dean said. “Now we’re going to have to do it period by period for the next four games.”

UP NEXT:
With their backs to the wall, the Soo Greyhounds will be looking to stave off elimination this coming Thursday, April 11 when they host the Saginaw Spirit for Game 4 of their Western Conference Semi-Final Series.  Saginaw leads the series 3-0.
Game time is 7:07 PM at the GFL Memorial Gardens.

Fans can purchase tickets by visiting the GFL Memorial Gardens Box Office, presented by SK Group, 10 AM to 5 PM on Wednesday, starting at 10 AM Thursday, or online at www.gflgardens.ca or by phone at 1.866.775.9422.