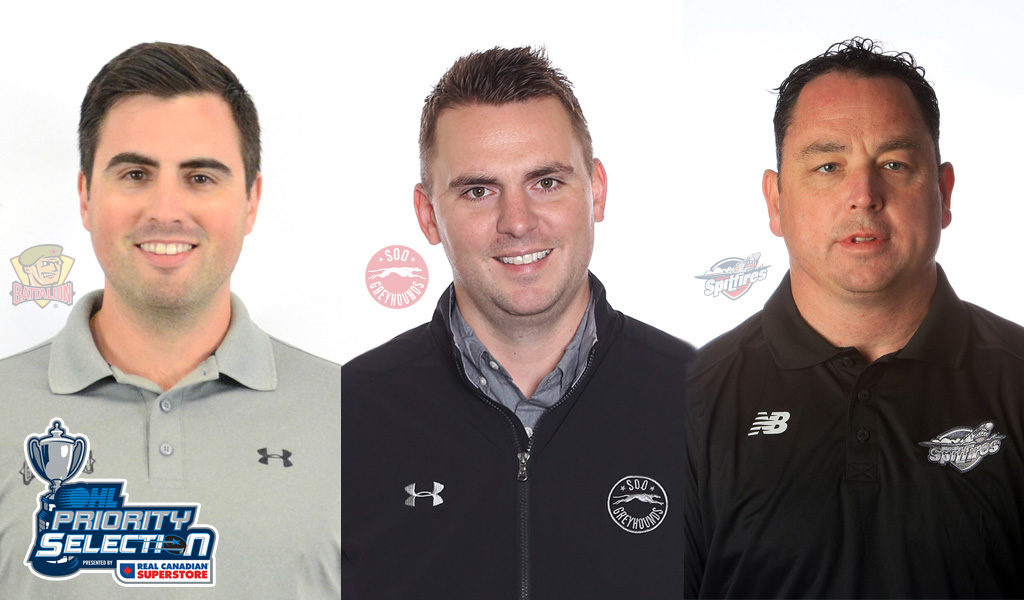 Draft day is an exciting day for players and general managers alike.

For some of those GMs, getting drafted to the OHL is an achievement they can relate to.

Kyle Raftis recalls waking up the morning of the 2002 OHL Priority Selection. The night before, he had been replaying conversations he had had with the teams over the previous weeks in his head; thinking about which ones may have stood out, trying to envision which club he’d slot in with best. He logged on and stared at the order selection for awhile, hitting refresh until he saw his name: 26th overall to the Oshawa Generals.

Looking back, he remembers the nerves and excitement he felt that morning.

“You obviously never know how it’s going to shape up outside of the guy going first overall, so it’s an exciting day.” said Raftis. “And you get to see a lot of guys you grew up with getting selected.”

Now, as the general manager of the Soo Greyhounds, Raftis is on the other side of the coin, and wants to stress the doorway of opportunity as the greatest takeaway from the experience.

“When you’re a player you don’t really know how that pick is made but I think at the end of the day, when you’re a high-end athlete, I think all you’re looking for is an opportunity,” Raftis said.

“Maybe you’ll get drafted in the round you thought you were going to go, maybe it’s earlier or later, but you have a great opportunity moving forward. That’s something a lot of guys can key in on.”

A year earlier, goaltender Adam Dennis awaited to see his name pop up on his computer screen in what would be the League’s first ever draft not to be held in a public forum. So, he logged on to his AOL dialup internet at 9am with aspirations and hopes of being selected high in the draft. He’d be a 14th round selection of the Guelph Storm.

“It was the first realization that it didn’t matter where I was drafted or if I was drafted,” Dennis said. “It wasn’t going to define my hockey career.”

He played parts of three seasons with the Storm and would finish his four-year OHL span by hoisting the Memorial Cup with the London Knights.

“Guelph was great,” he remembered. They treated me just like every other pick. I felt like I was part of their team right from the start and like I had every opportunity to make it.”

Today, Dennis is the general manager of the North Bay Battalion, who are collectively gearing up for their first overall selection at this weekend’s OHL Priority Selection.

He shared some advice for that selected player, and for all draft hopefuls awaiting to witness their names get chosen.

“For the kids that go early, just know that everybody who gets picked behind them is going to be looking at you as the benchmark,” said Dennis.

“For all the kids that get picked late, it really doesn’t matter. Everyone is drafted for a reason. And for the kids that don’t get drafted, there’s lots of time to develop. It’s not the be-all and end-all of your career. It’s all what you make of it.”

Of course, with opportunity comes hard work that can’t be overlooked.

“It’s kind of a cliché but you have to enjoy that moment,” said Raftis. “Like every cliché, there’s a lot of hard work that goes in after.”

It’s a sentiment that Bill Bowler, GM of the Windsor Spitfires and a former Spitfire himself, reinforces.

“It’s an exciting time, but it’s just the very first step of a long process,” said Bowler, whose four-year OHL playing career with the Spits began when he was drafted in the 13th round of the 1991 OHL Draft. He’d go on to become the OHL’s all-time assists leader with 318. “The hard work starts then but it is a great day for everyone involved because it just shows all the hard work that you’ve put in in the previous years.”

The Greyhounds will select fourth overall on Saturday, April 4. Coupled with the prospect of opportunity, the message Raftis has for all players set to embark on the next step of their hockey careers is a positive one, and one he says was challenging to fathom as a young player back in 2002.

“They believe that you can improve that organization and that you have a chance to make them better.”